Credit Suisse announced yesterday it believes valuations for the fertilizer sector “look highly compelling” given the sell-off. CS raised 2011, 2012, and 2013 global aggregate fertilizer sector net earnings estimates to 3%, 17% and 23%.  This year global potash demand will rise 11 percent to 58.3 million metric tons.  As an investor whose had a bit of success in investing in resource stocks, the potash trade has always made sense to me.  Increasing populations increase the demand for crops but there are decreasing amounts of farmland available, so you need to increase crop yields via fertilizers.  Potash is used primarily as an agricultural fertilizer (plant nutrient) because it is a source of soluble potassium, one of the three primary plant nutrients; the others are fixed nitrogen and soluble phosphorus. 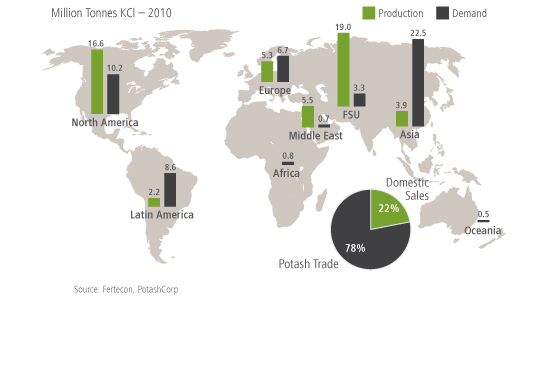 70% of Potash production comes from a few large players: Potash Corp, Mosaic, Agrium, Uralkali, and Belaruskali.  They are known to have an almost cartel like control over prices.  One of the main reasons there are few smaller players is because of the amount of time and capital it takes to start a potash operation.  Potash Corp estimates that CDN $4.1 billion would be needed to develop a conventional 2-million-tonne greenfield mine and mill in Saskatchewan. Surface facilities make up the largest portion of the required investment, and would be similar for any mining method.  It is also estimated that a Greenfield project takes at least 7 years to reach production.  This time and capital requirement is a large barrier to entry for any micro-small cap player to succeed.  That said, I will try to do so.

I use a top down approach to investing in resource stocks.  First, I choose the resource I like.  Second, I find a country/region that uses a lot of the resource but doesn’t have many domestic producers (lowers transportation costs) and/or located in a country/region which is known to be friendly toward mining.  Third, I look for individual companies developing a project in or around the specific country/region.  Fourth, On the company level I look at the project itself (needs to be big and/or high grade), Management (they need to be production focused), CAPEX needed (lower the better), and has to have the right capital structure to support stock appreciation.

Here are a few emerging potash companies that I find compelling:

Verde Potash (NPK.v) $214m Market Cap:  Brazil imports 90% of its potash and is expected to be the biggest importer of potash in the world by 2020. Verde Potash was founded and is led by Brazilians. Verde is developing the Cerrado Verde project in Brazil , a source of potash-rich rock from which the company plans to produce a slow-release, non-chloride, multi-nutrient, fertilizer product named ThermoPotash.  Cerrado Verde is a unique project: 1) its high grade potash rock is found at surface, allowing fast construction of a scalable and low Capex operation; 2) it is located in the midst of the world’s third largest and fastest growing fertilizer market; 3) it connects to Brazil’s largest fertilizer distribution districts via existing and high quality infra-structure.  In summary, NPK has a large resource, Super-low CapEx ($200m) estimated to produce 1.1 MTPY, backed by government, with a great share structure (32m OS).  Expected Production: 2014.  [Verde Potash Presentation]

Karnalyte Resources (KRN.to) $300m Market Cap:  The Karnalyte Property is located 0.5m km to the south of highway 16 near the town of Wynyard. The 43-101 complaint report states that “in total the project contains 4,984 MMT of total Indicated Resources (carnallitite and sylvinite) with a weighted average KCl content of 14.4%, which includes 4,046 MMT of carnallitite with a weighted average MgCl2 content of 15.1%..  KRN is conducting an environmental impact statement as well as a feasibility study and expects to have the results of the feasibility study by the end of 2011.  The feasibility study will examine the economic feasibility of constructing a solution mining facility that will initially produce 500,000 tonnes of potash per year, increasing to 2.0 MTPY.  In summary, KRN has a large resource, Lower than typical CapEx ($350m+), and a great share structure (20.1m OS).  Expected Production: Mid 2013. [Karnalyte Resources Presentation]