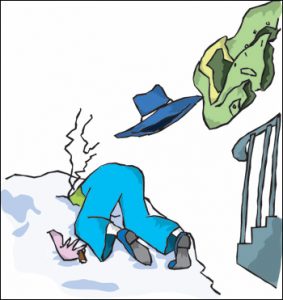 Leper! Untouchable! Gravedigger! Dalit! After nearly 35 years in the financial arena, I’m now considered a “Lowlife!” “Irresponsible!”  “Unworthy of having around!”  Why?  My sin is that I invest in US-based, company stocks many of which trade below a $5.00 per share hurdle price. Yea, that’s the sum and substance of my transgression.  I’m either investing in companies like Bank of America…one of the world’s largest financial institutions that, oh by the way, fell on hard times a couple years back (February, 2009: $3.90) and provided investors a distinctive buying opportunity…or other smaller versions of American ingenuity and hard work (for example: CalAmp: July, 2009 at $0.75; or Triquint: Dec. 2011 at $4.93).  Or, I’ve been investing in American companies that are “up-and-comers” that have yet had time to mature and therefore garner true, stock market respect such as Ironclad Performance Gear, Spine Pain Management, Aethlon Medical, Female Health and SingleTouch.

How did I find out about my new, below average “status”?  After what was coming up on twenty-five years, as a card-carrying client of UBS Financial Services, ne PaineWebber, ne Kidder, Peabody&Co., I was summarily tossed-out of their “esteemed account base” and office.  (Well, I wasn’t really tossed out.  OK, they didn’t even bar the door or have the receptionist go running off for the armed guard.  Alright, I’m still being made welcome: They are just a lot more picky about my trading activity.)  But, the venerable Swiss Bankers, mit Savile Row suits, might as well just have shoved me out since the Powers-to-Be are now forbidding me (Me, The Nation’s Small-Cap/Micro-Cap Booster) from buying anymore equities priced under $5.00 per share…No ifs, ands or buts, they’re done.

That’s right, I can’t buy anymore “penny stocks”, hold any new microcap positions where their price is below the price hurdle, transfer-in to my UBS accounts any “penny stock”/micro-cap positions for them to process, sell or even hold….nothing.   Kaput!   Except for equity holdings that are already in the accounts, they are finished servicing little-priced (read: little) companies with that have been my stock and trade business for 35 years and my avocation for nearly 46 years.  Sure, I can trade equities that are priced over $5.00 or use a “buy (What’s already there) and hold” strategy for the remainder of the portfolios’ existence….

No, it all boils down to the point that UBS doesn’t want to mess with puny, “penny”, micro-cap stocks and incidentally, it’s not just UBS who has singled me out as the industries’ solitary, penultimate financial vermin.  Most all of the major firms on Wall Street as well as many regional operations and smaller brokerage houses are disallowing this kind of small price transactions to proceed.  My very dear friend on the East Coast who works for the mega-brokerage conglomerate, MorganStanleySmithBarney, has difficulty buying “penny stocks” for her own account…not her client’s accounts….her own account and she’s a seasoned professional.  (This is a fine howdy-do when the operating progeny of the “House of Morgan” disallows the ownership of “speculative” shares especially when just 130 years ago Morgan himself financed the un-bathed and adventuresome, Thomas Edison as he launched the revolutionary electrification of New York City.)   Small brokerage traders are also having difficulty with transacting penny stock deals on the bulletin board and other lesser “exchanges”, again because of a multitude of reasons but mostly increased regulation, compliance and transaction hurdles and costs.  Even money managers and hedge funds are beginning to shun the asset class: How about a manager that has “Microcap” in its name but doesn’t invest in microcaps anymore?  That’s a misnomer if there ever was one.

Why is this asset class being forced to “circle the drain?”   Brokers cannot even talk (solicit an order) about a story that is a penny-stock microcap.  Investment banking has all but dried-up because many of the older avenues for capital raises have become terribly slow, costly and cumbersome.  We now know that everything possible has been done to hinder retail clients from investing in low-priced microcaps.  The low-priced securities are being shooed away from the capital markets.

What I do understand is that bureaucracy, oversight, the effort of regulators and congressional members to offset the natural balance between risk and reward are all working to stamp-out the potential outsized rewards offered by micro-cap/penny-stock ownership by eliminating their transactions so we can be safe from the untold risk they represent.  Granted, this end of the equity market-cap arena has always been one of the devil’s favorite playgrounds for those idle hands looking to benefit by way of rip-off scams, bucket shop operations, or hucksterism.  On the other hand, the “penny-stock” business is getting scrupulous attention by FINRA – that’s the Financial Industry Regulatory Authority – the largest independent securities regulator in the USA charged with the mandate of maintaining the fairness of the US capital markets, and the reasons for this added surveillance is several-fold.

We called a number of brokerage shop managers, compliance officers, and traders to glean what information we could about the new “environment”.  This is what we learned…..

Isn’t the purpose of Wall Street and that of the Capital Markets to help provide financing to American businesses, municipalities and for US Government Securities?  This is one of the great reasons America became the great industrial power…we had large end-markets, great ingenuity, knew how to produce goods and services and sizable and liquid markets which could be easily tapped for capital.  With all the new, start-up businesses and infant industries that were spawned in the mid-1980s through the 1990’s when very cheap debt was made available, you would think Washington would figure out the cause and effect of ready capital!

If small business is supposed to be the backbone of American job creation, wealth creation, innovation and competitive ingenuity, why snub the spark of commercial ignition or snuff the ability to grow by denying growth capital? It seems we have successfully sown the seeds to damp down, if not entirely extinguish, our own economy without the foreknowledge of either the results or its direct intention.  Government Agencies and regulatory authorities, with the acquiescence of the brokerage and management industry, have virtually thrown what has been known to be the “Engine of the Economy” under the bus.  We may be safe in our cradles but the house around us is ablaze and burning to the ground.

About Marc Robins:  Marc is the founder of Catalyst Financial Resources. Previously, Mr. Robins was Founder, Chief Executive Officer and Editor-In-Chief of The Red Chip Review, an independent research firm, and founder of RedChip Companies, LLC.  Under his leadership, more than 10,000 research reports, analyst reviews, articles, white papers, and notes were written, published and distributed.  Mr. Robins has been published in industry journals such as AAII and Better Investing.  He is a five-year small-cap columnist for Forbes Magazine.  He previously co-managed the WestCap Small-cap Portfolio for Capital Consultants, Inc. in Portland, Oregon.  While under his five-year co-leadership, WestCap grew to in excess of $100 million and he was named “Select Manager” in 1993 because of its returns and quality service.  Mr. Robins has previously held positions of Portfolio Manager and Director of Research at several Portland, Oregon-based investment firms.  He is past President of the Portland Society of Financial Analysts.