I have invested in a few private companies over the years that later went public by way of reverse merging into a shell ie: Reverse Takeover (RTO).  For this article I will use “reverse merger” and “RTO” interchangeably.

What I’ve learned is new investors need to be careful when buying a company that has recently completed an RTO.  I’m not referring to fraud or anything of that nature although plenty of fraudulent private companies do use RTO’s as a way to cheaply go public and raise capital from unsuspecting investors (just Google “Chinese RTO”).

In most cases when a private company reverse merges into a shell company (RTO) investors in the successor’s stock are restricted until a registration statement becomes effective or at the latest after 12 months.  The only stock that is available to trade (or be sold) is stock being held by the shells original shareholders (a very small amount).

So often times, right after an RTO is complete you will see a stock creep its way higher on very little volume.  Why? Because no one can really sell their stock.  It’s just the old laws of supply and demand and in this case there is no supply.  Then when a registration statement becomes effective and/or after the one-year anniversary date of the RTO, a huge amount of supply hits (investors are able to sell) the market and the stock plummets. 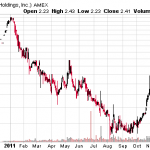 This happens all the time.  An example is Bacterin (BONE) which reverse merged into a shell on 07/2010, and in early 2011 the registration statement went effective unlocking several million shares.  As you can see in the chart, the stock starts to drop. Then after the one-year anniversary of the merger on 07/2011, another several million shares became unlocked.  It can take several weeks to several months sometimes to absorb the amount of shares that become unlocked, which obviously pushes down the stock price.

Particularly, if you are a micro cap investor, it’s important to understand the dynamics of a reverse merger/RTO, and be very cautious buying a stock that is still within the one-year anniversary from the reverse merger date.