Shares of Mitek Systems (MITK) have declined 45% over the past two weeks following news that the United States Automobile Association (USAA) had filed a lawsuit against the company alleging misappropriation of proprietary information, as well as breach of contract and fraud. MITK allegedly used confidential information while working with USAA and now claims it as its own through patented technology it has commercialized in the mobile banking space, specifically within mobile deposits. USAA is seeking that a judge declare it not infringing on MITK’s patents as well as reimbursement of funds for overpayment.  MITK, subsequently, has sued USAA accusing it of infringing on 5 different patents, all of which has brought the two companies to a stand-off. What are the implications for MITK going forward and how might this impact other companies in the mobile banking space? 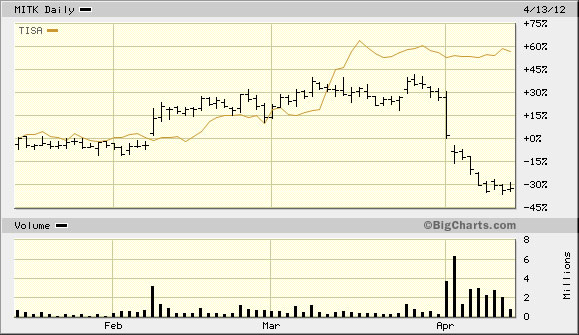 MITK is a company with a compelling product but shares have been driven to an extreme valuation on hype and expectations for a wave of profits that may come. They’ve signed 250+ banks to deals with their mobile deposit technology but that is, quite simply, it. The inflection point for revenue continues to be pushed out and with the recent turn of events, it’s likely to be revised even further out. The case for MITK is materially negative whether a judge or jury ultimately rules in their favor. They are a small unprofitable company fighting a large bank so resources become a factor immediately. MITK does not have the cash to fight a long drawn out court battle. That being said, a settlement is most likely. It also appears very likely that they will have to reimburse nearly $400,000 in overpayment charges, which is a material amount to the company, regardless of timing. The overpayment is of great significance because their results have been underwhelming to date. If you exclude an additional $400,000 in revenue from prior earnings, the growth profile of this company and their ability to capture revenue from their technology is that much more disappointing. More importantly is the issue and impact of recent pricing disclosures given the lawsuit. The investor community, prior to this disclosure, had been under the assumption that MITK was receiving $0.10/deposit, however, USAA has revealed a much lower number, closer to $0.01. In addition, a recent Wall St. analyst covering the company pointed out that Chase (one of their largest top 10 bank clients) is not paying for blocks of transactions either. In MITK’s counter suit, they’ve left a number of items closed to the public so the true price is not known but it would be conservative to model a number half of the previously thought $0.10/transaction going forward. If you’re Wells Fargo or Banc of America, why pay more than your rivals? As a result, the impact of this lawsuit will likely stretch beyond just that of the litigation itself. Management will have no choice but to refocus their attention on appeasing current client requests and in the process, will likely find themselves distracted from the main goal which is new client acquisition and growth.

When looking at the big picture, the mobile banking space provides a huge opportunity for those companies involved. The first mover advantage is extremely valuable and has likely been one of the driving forces behind MITK’s share price appreciation over the past year (still up ~20% over a 12 month period even after its recent revaluation).  However, recent events have likely opened the door for their competitors to initiate new relationships. The mobile deposit market pales in comparison to that of mobile bill payments which is an opportunity 2x-3x ($350 mln) in size. The most bullish of investors in MITK had assumed that mobile deposit would open the door for the bill payment opportunity, however with the lack of recent client acquisitions (only 1 client and 2 in pilot testing) in this area, as well as their detracted focus given the new lawsuit, there is a very real opportunity for someone else to step in and take a big piece of this market. Who may that be?

Top Image Systems (TISA) is one company that stands to benefit from the recent developments. TISA is a company entering the mobile space as we speak. They are a $37 mln company based in Israel with a core digital data capturing business that has significant profitability and growth. The company reported EPS of $0.21 last year and is expected to earn $0.37 this year without any contribution from their mobile endeavors. On its recent conference call, the company addressed their strategy to go head to head with MITK with a very similar suite of products. TISA has a patent pending on their mobile technology offering which they believe is superior to that of MITK’s given in part to the fact that the picture taking process is more automated and efficient. Shares currently trade only 11x 2012 EPS for a company that will grow EPS 75% this year on their core business alone. Incidentally, that core business is one worth 4x-5x trailing revenue given recent transactions in the sector (For example. Lexmark (LXK) acquired privately held BrainWare for $148 mln just last month). On that basis alone, you could argue a valuation for TISA shares 3x+ where they are now. Even further, TISA is debt free after paying down over $15 mln last year which is earned organically through its profitability. With a small float of only 7 mln shares and little institutional coverage (both in analysts following the name and funds invested) at the moment, shares of TISA may follow a trajectory that of MITK circa 2011 when it ascended over 200% in less than 6 months. The only difference is that TISA has real profits, real growth, true visibility into its future profitability, a management team invested heavily in the company, and blue skies ahead with their entry in the mobile banking market.