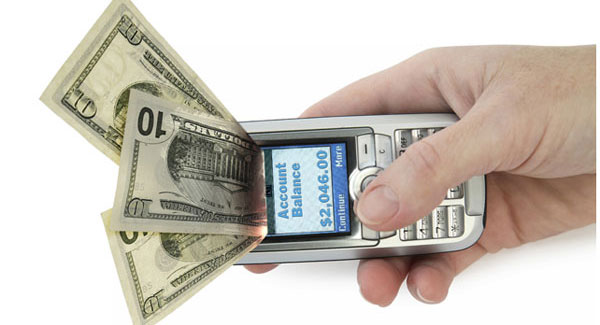 This is Part 3 of a series of articles covering Top Image Systems (TISA) and Mitek Systems (MITK).  In Part 1, Ian made the argument that Mitek should take advantage of their elevated share price ($13 at the time) and acquire under valued Top Image Systems who had an international footprint with much better fundamental underpinnings.  In Part 2, I outlined a few stumbles by Mitek that had opened the door for Top Image Systems to enter the mobile banking space.  In this article, I will describe the differences between Mitek and Top Image as it relates to their business models and mobile banking applications.  The chart below better illustrates the roller coaster ride since April. 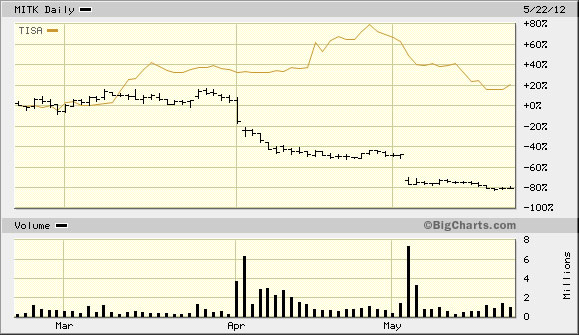 Market Capitalization: Company A has a market cap of $33 mln while Company B is worth $57.5 mln.

Company A and Company B are competitors operating in the same space, often selling to the same customers, but they are often misunderstood by investors, which may help to explain the valuation disconnect.

Company A offers a diversified business model, by geography and industry vertical, and has offices globally.  Company B has a stand-alone product, with one office location in the US.

Company A receives 25% of revenues from existing customers in the form of high-margin recurring service contracts. Company B is currently embroiled in a lawsuit of uncertain magnitude and duration, with one of its largest customers.

Company A offers a technologically superior solution that competes directly with Company B, but is easier to implement and offers more economic upside to their customers in the long-run.

I’ve written about both Top Image and Mitek in the past. In a prior blog entry, I attempted to address whether execution issues and a lawsuit at Mitek could prove to be beneficial to Top Image. I firmly believe the recent legal events surrounding Mitek offer a significant opportunity for Top Image to compete head to head with Mitek. Furthermore, the timing of Mitek’s legal turmoil and poor earnings release is playing very favorably into Top Image’s strategic expansion plans in the US market, which are firmly under way.

Resuming the original intent of this post, Top Image and Mitek are vastly different companies that are only just beginning to compete in the same market. There is a common misconception that their core technology and business models are similar. I hope to highlight how they are not.

Despite its recent stumbles, Mitek’s technology is currently being implemented by a number of large and respected banks. The notion of buying Mitek at an 85% discount from its peak might seem alluring to investors, especially given their enormous customer traction. However, I believe their success has hinged more on being a first-mover in a highly competitive consumer driven banking environment, rather than offering a superior technology and efficient solution. I also believe that banks can change their minds, and will, once they hear what Top Image can offer them.

I believe Mitek’s recent stumbles will directly translate into Top Image opportunities. Top Image is currently setting up an office in the US, and is looking to leverage their core image capture technologies that have been successful to a predominantly European based clientele. Their established global footprint, offices and resources should appeal to US based companies with a global customer base.

With the benefit of hindsight, one of Mitek’s stumbles related to how they charged their bank customers for mobile check deposit. Mitek sold pre-paid, per-check deposit transaction blocks, paid for by the bank. This now seems like a messy and complicated strategy, one that may not prevail in the long-term, particularly in light of the lawsuit and the future implications it may have on their pricing strategy. The pricing strategy is one of the reasons Mitek missed their quarterly earnings so egregiously, due to slower than anticipated bank customer adoption (lumpy).

Not likely to repeat this mistake, Top Image should offer their mobile check deposit technology on a license basis, where modest licensing revenue is earned when the customer downloads Top Image’s app onto their smart phone. Banks should find this model more appealing than the transaction block model, as it will be a one-time fee. Banks are then free to charge high margin transaction fees for mobile deposits, at their discretion, or offer it as a free service. It seems like a better economic deal for the banks to go with Top Image in the long run, technology aside.

If Top Image is not looking to make their money on the individual transactions like Mitek is trying to do, then how will Top Image monetize this technology? By sticking to their core technology offering that has been proven very successful in Europe. Their intent is to sell the bank on their powerful eFlow platform, which offers banks a modular approach to layering on different Top Image services. These could include the management and automation of invoices, Digital Mail Room, mobile bill payment and cloud services, to name a few.

How can Mitek compete successfully with Top Image, when Top Image is not really focused on making their money on the app itself?  This is a key business model differentiator. The mobile capture app is the “foot in the door” for Top Image to sell their core software platform, and they will price the mobile capture app in a way that will be so compelling, that US banks will abandon Mitek once they hear the pitch.

In summary, Mitek had the first mover advantage and paved the way for mobile banking technology to be viewed as a serious and legitimate offering in the U.S. However, recent events have led investors and likely business partners to call into question their ability to execute. These events have allowed Top Image to enter the market with ease and meet with many potential business prospects in recent weeks (from Q1 Earnings CC). Top Image plans to leverage their core business offering (eFlow and Digital Mailroom) with their new mobile suite of products. While they target U.S. banks, the focus will be on selling the mobile suite but also introducing companies to their other products which have had great success on a large scale with multinational companies such as HSBC, Standard Charter, SAP, etc in Europe. The impact is twofold on their business going forward. Shares currently reflect no value for the mobile opportunity which will likely begin contributing to revenue early in 2013, if not sooner. However, as they grow the mobile offering, the core business stands to benefit materially as well, thus fueling future growth and allowing the business to scale considerably in future years. I expect this growth opportunity to be validated in the near-intermediate term as the company begins to announce partnerships in the U.S. which will serve as a catalyst for shares to move materially higher from current levels.