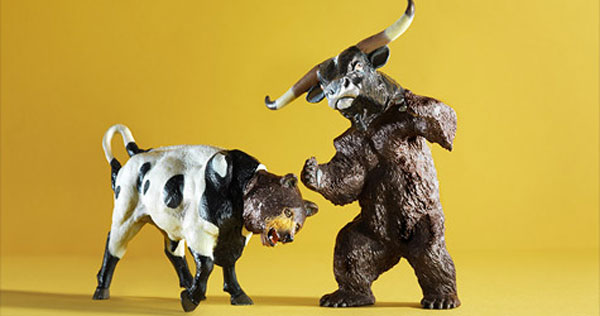 On 4/20/12 I mentioned that I thought that the S&P 500 was headed down to 1300-1340. I still believe that is the most likely scenario but there is a very good chance that it could be a very choppy affair that frustrates the bulls and the bears.

In my post, “Sell in May and Go Away?”,  my work suggested that the early-April high of 1422 would likely mark an important high and that I saw a lot of similarities in where we are in the current cyclical bull cycle and where we were in 2006. Therefore I was looking for a quick correction that would bottom in late-April or early May. That didn’t happen as expected but the other similarities to 2006 remain in my eyes.

So my April 2012 timing cycle appears to be a high (on 4/10/12 I was thinking that April 2012 could be a high and a low followed by a retest of the April low in July). Therefore it would seem logical that my next cycle in July 2012 will likely be a low. Based on what I am seeing now I suspect the initial low will either come in May or June and that July could very well be the retest of that low. Then I expect the market to be up in the second half of the year and into 2013. Right now I do not see the kind of sentiment or internal readings seen at major market peaks. Thus, I still believe that 1300-1340 is a good target range for this correction. 12,500 is also a good support level to watch on the Dow Jones Industrials. 12,700 is a big support level on the Dow and many will be claiming that a top is in if that level is breached. I believe it is possible that just when everyone starts to jump on the bearish bandwagon on a break of 12,700 the index bottoms at 12,500 and moves higher.

Some other observations worth noting here. Oil has fallen apart here in recent days and should correct into the $89-$97 range. High oil prices have been one of the main culprits of previous economic slowdowns. This was particularly true in 2010 and 2011. I would also like to point out as I have in the past the positive correlation between oil and the S&P 500 since the bottom in March 2009. One can argue the reason but there is little doubt that they have a very strong positive correlation. Liquidity is coming out of the market dragging both of them down in unison or another explanation is that the economy is slowing down as gauged by the equity market and thus demand for oil will be lower than expected. Regardless, as you can see below it appears that the S&P 500 needs to come down to catch up with the decline in oil. Note that if oil comes down to $90 and the S&P 500 overlaps oil as it has done in most of the previous corrections since March 2009 it could suggest a decline down to ~1200 on the S&P 500. I don’t expect that to be the case at the moment but it is something to keep in mind. Also note that if that were to occur (a decline to 1200 on the SPX) that would clearly be enough evidence of a slowing economy to get the Fed moving again. Personally I think 1300-1340 would be enough for them to move on June 20th. 1200 would make it a no brainer. One last point to note is that if oil comes down it would be a boost to the economy and thus could keep the market buoyed up at 1300-1340. Then if oil is only at $90 in June vs. $110 in February it would be a lot easier for the Fed to move in June than it would have been if oil was up at $110. 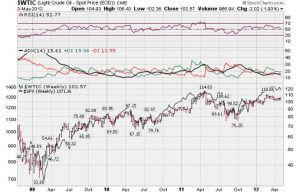 Now let’s take a look at the internals worth noting. First up is the T2106 or total market McClellan Oscillator. Kick offs to the upside (under my own rules) require a daily reading over +200. You can see that the market came very close at the end of March but didn’t quite get there. Now look at the 3 week EMA (neon green line). I noted on 4/20/12 that I thought the low near -170 or so earlier in April likely marked an important bottom for the internals. Note how fast it turned up from that level. Also note that it has just now turned down. While price may make new lows for the Dow and S&P 500 I suspect that we will see a positive divergence in the internals via the 3 week EMA.

Now I want to take a look at the cumulative advance/decline line of the Russell 2000. The Russell 2000 initially outperformed coming off of the lows of 10/4/11 and again in late-December. This continued into early-February. Since then, small caps have lagged. While the S&P 500 is actually up since early-February, the Russell 2000 is actually down and has just been range bound between 785 and 848. I would note that this aligns with many of the market internals which rolled over in early-February (see the 3 week EMA on the T2106 above as one example). The 3 week EMA of the Russell 2000 has once again rolled over here early in the month of May suggesting that the trend remains down. Also note that this is the second negative divergence since early-February. When the 3 week EMA turns up with authority the market should be at an important bottom just as it was in early-October 2011 and December 2011.

This is a time to be cautious in my view but I would also note that the internals of this market have already been in correction mode for 3 months. While price (on the larger indexes) may not have corrected much the internals already have. I suspect we will see a bottom in either May or June that will put in a positive divergence with respect to the extreme internal readings seen in early-April. I then suspect we could see a retest of that market price low in July accompanied with another positive divergence in the market internals. When the 3 week EMA turns up with authority on the Russell 2000 cumulative advance/decline line the low should be in and it will be time to step back in on the long side.