Did you know that on average, a surgical sponge is retained in one out of every 8000 surgeries here in the U.S? That amounts to 4000 incidents per year, or 11 per day. In addition to having to remove the retained sponges and treat the infections that occur there are usually legal expenses as well. It is estimated that a retained sponge costs a hospital ~$415,000.00. In total, this costs U.S. hospitals ~$1.7 billion per year. If you work it out on a per surgery basis: $415,000.00/8000= $51.88 per surgery.

If you need further validation of the system, the Mayo Clinic performed an independent clinical study between February 2009 and June 2010. The results were published in February 2011, and they were very positive. No retained sponges and the personnel got used to the SurgiCount method quickly. The Mayo Clinic now uses the SurgiCount system in all of their hospitals. 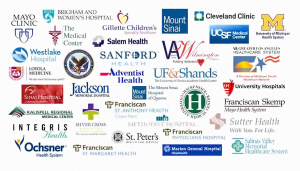 What are the economic benefits?

The SurgiCount sponges only cost ~$13-$15 more to use in each surgery vs. traditional surgical sponges, so the economic benefit here is obvious. Hospitals can spend an extra $13-$15 per surgery and:

PSTX currently faces very little competition.  Their competitors have been around for a while, have yet to gain traction, are more expensive to implement, and they don’t appear to be sufficiently capitalized to compete.

In November 2011, PSTX signed an agreement with Premier Healthcare Alliance which will allows PSTX to market to over 2500 hospitals and over 78,000 healthcare sites.  This agreement provides access to over 40% of the US acute care hospital addressable market and is expected to bear fruit in the second half of 2012.

There are 4 large IDN’s (Integrated Delivery Networks) here in the U.S.

In September 2011, PSTX landed their first large IDN with Community Health Systems (CYH).  It was initially estimated to be 130 hospitals but that number has since increased to 145-150. Closing additional IDN’s will substantially increase revenues and profitability.  For example, 5% of the entire hospital population is in an HCA hospital at any given moment. Considering HCA only operates 163 hospitals, this potential IDN win would drive revenue per hospital up substantially.

In March 2012, the company announced an increase of implementations.

93 hospitals are currently in the implementation process and the majority of those should be completed by 6/30/12. Once all that have currently signed up are implemented the company will have an install base of 264. This would be an increase of 238% since 9/30/11.

The beauty of the business model is that they give away the SurgiCount System scanners and then depreciate them. The only thing the hospital purchases are the sponges and this is how PSTX makes their money. This is basically a razor-razor blade model where PSTX gives away the razor.

PSTX currently has visibility on 264 hospitals. My current expectation is that they will have visibility on 350 hospitals by the end of 2012. I think 500-600 by the end of 2013 is also a fairly reasonable expectation given their current traction in the marketplace. It is my belief that as hospitals are implemented and report no retained sponges, more will continue to come on board thus creating a snowball effect..

I created a financial model and feel pretty comfortable with my numbers up to 2000 hospitals. Here are some assumptions I’ve used in building the financial model: 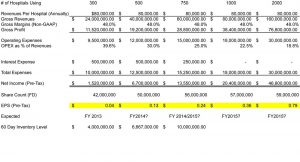