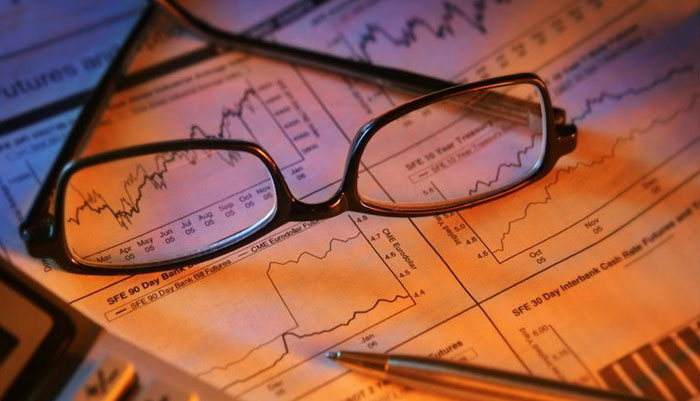 At first glance it appears to me as though this rally should carry into the 1333-1340 range on the S&P 500. That is the first hurdle. The second hurdle will be 1358-1371. Get above that second hurdle and a rally to new highs is likely in the cards.

I’m seeing some very positive signs so far today.First of all there is a positive divergence in the T2106 McClellan Oscillator. Both in terms of basic nominal readings as well as the 3 week EMA. This is very positive considering that the 3 week EMA is coming off of EXTREMELY oversold levels as detailed on Sunday evening. The best part about this divergence is that this positive divergence occurred despite the indexes moving below the price lows that created the first oversold condition back in May.

I just looked at the bellwethers that I follow and ALL 42 of them are trading higher. I can’t remember the last time that this happened. This is also looking like it has the potential to be the first 1500/4000 up date since 12/20/11. See the net advance/decline stats for the Wilshire 5000 below. Should this turn out to be a 1500/4000 day on the upside it suggest that this rally is very broad which is exactly what one would want to see coming off of a bottom. 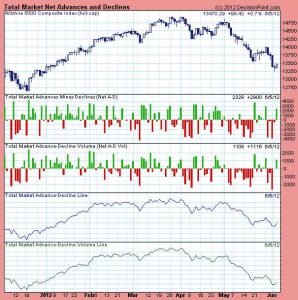 Look at the cumulative advance/decline line of the Russell 2000. Note that it has spent the past 3 weeks in a very tight range. Also note that the 15 day EMA (3 week EMA) is turning up. This looks like the beginning of a decisive turn which would also be bullish for the market.

Today looks pretty promising and this rally in the S&P 500 should carry into the 1333-1340 range. However, there are still headwinds. There has been so much internal deterioration over the past month that needs to be reversed and show improvement to confirm any move in price so whether this is THE bottom of the correction that began in early-April remains to be seen. Will continue to monitor closely.

I would also like to point out that Q2 has been terrible which comes on the heels of a very good Q4 (which all came in a 3 week span in October) and solid Q1. We still have over 3 weeks left in the quarter and I’m not sure how many fund managers are going to want to throw on positions here in Q2 given the poor performance of every asset class except bonds and Treasuries. Not to mention that there are quite a few minefield events that can blow up (Greek elections on the 17th, G-whatever meetings, Decision on ObamaCare) between now and the end of the month. My next timing cycle is in July so I’m not so sure it is off to the races in a straight line. After all, this correction did come down farther than I originally anticipated. So, it wouldn’t surprise me to see this rally continue into sometime next week and then fade into the end of the month. July looks like the month that this rally should really gain traction if it is going to do so.

To confirm this bottom in the U.S. markets I would like to see some constructive action in foreign and commodity markets as well. While some U.S. indexes carried above their 2007/2008 highs in 2011 and some even managed to better those highs in 2012 we did NOT see this in foreign markets that I track or broad commodities. Take a look at the spreadsheet below. The only foreign indexes that even came close to testing their 2007/2008 highs were the Indian Bombay Sensex (BSE) and the Brazilian Bovespa (BVSP). Guess when those markets tested their highs? November 2010. Long time ago. All of this tells me that foreign markets remain in secular bear markets from 2007/2008 and cyclical bear markets dating back at least a year.. To prove to me that this 2012 rally to new highs in some of the U.S. indexes wasn’t a B wave of an irregular flat (more detail below) I need to see some constructive action in foreign markets as well as the commodity markets. When I refer to commodity markets I am referring to the $CCI in particular. Some positive signs to start with are that precious metals and miners are looking very good over the past week and they tend to lead the broad market on the upside. 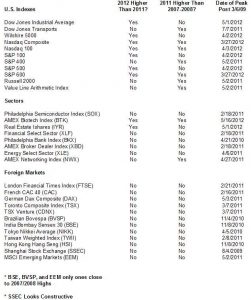 For those not familiar with wave theory let me map this out for you. Since no other foreign markets that I follow (12 of them) made new highs it is very easy to count a bull market into the 2010/2011 highs, an A wave down into the 2011 low, a B wave to the 2012 highs, and now a C wave in progress which should carry below the 2011 low. In a typical corrective count the B wave doesn’t carry beyond the A wave. I will show counts for two different foreign indexes which all fit into this pattern and how the U.S. differs.

Here is the Brazilian Bovespa. Easy to count a bull market 5 waves up into the 2010 high and all corrective action since then. 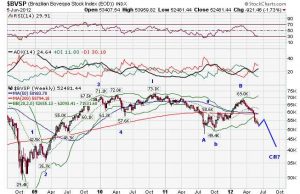 Now some U.S. indexes made new highs in 2012 vs. 2011. However, this doesn’t fit with foreign indexes or commodities which is what makes me wary of the potential irregular flat pattern. In this pattern, 5 waves up complete, then there is a corrective A wave, followed by a corrective B wave which carries to new highs (carrying above the previous high is what makes it an irregular flat as opposed to a typical flat), which is then followed by a C wave that carries below the A wave.

Here is a look at the S&P 500 which did make a marginal new high in 2012 vs. 2011. This would suggest that after the corrective bounce that appears to have begun today the market could move down below the October 2011 low of 1075. 1010-1050 would seem like a logical target for the next bottom if this holds up.

I can’t say for sure how things are going to pan out from here other than I believe that the S&P 500 should rally into the 1333-1340 range over the next week. From there things could get dicey until July, even if a bullish case plays out. The key resistance that I see on the upside is 1358-1371 on the S&P 500. Get above there and it should be smooth sailing. Should this rally fail, there is a lot of evidence to suggest that the rallies to new highs in many U.S. indexes (2012 vs. 2011) were simply irregular flats in cyclical bear markets that began on 5/2/11.