I started following Vertex Energy (VTNR) in May of 2011 when the stock was around .70c and watched it go to $4 within a few months. The stock has come back down to $1.30 (near a 52 week low), which I find highly compelling given the fundamentals of the company and the comps in the marketplace. Vertex Energy currently trades 0.15x FY 2011 Sales and 3.5x its FY 2011 EPS of 0.39.  Comps in the public market are trading between 1–2x sales and 20-165x TTM EPS.  The purpose of this article isn’t to conclude an irrational multiple but to propose that if VTNR simply trades at 0.5x TTM sales and 12x TTM EPS, the stock is a multi bagger from current prices.  The company has been able to profitably grow its revenues from $38m in 2009 to $109m in 2011. Vertex has approx. 15m shares out FD, over $4m cash, an undrawn $3.5m LOC with BofA, and zero debt. This company has just about everything that I look for within an investment opportunity.

Vertex Energy was founded in 2001 is an environmental services company focused on recycling petroleum-based waste streams. Vertex became a public company in April 2009 through a reverse merger with World Waste Technologies. The company is headquartered in Houston and also has offices in Georgia and California. The companies TCEP facility is located in Baytown, TX. The company takes used motor oil and buys it from collectors, turns it into #2 diesel fuel (marine diesel) and other feedstock. Vertex is one of 10 companies in North America that does this. They are in a strong position in a growing petroleum recycling industry with an estimated $2.3 billion market opportunity.

TCEP stands for Thermal Chemical Extraction Process. TCEP was launched in 2009 upgrades used oil into higher-value feedstock and diesel replacement fuel. TCEP refinery capital expenditures are significant less than conventional re-refineries. TCEP extracts the impurities from oil (instead of extracting the oil from the impurities), which the end product is 98% clean hydrocarbon compared to the competition’s end product which is 75-77% clean. The plant capacity is approximately 28-30 million gallons.  Over the past few years they have been investing additional capital back into the TCEP plant and making it more efficient. They have also been investing in R&D to upgrade the TCEP process to produce other forms of feedstock.

The Company has several opportunities for future expansion. They can expand their Black Oil aggregation footprint, acquire used oil collectors, build additional TCEP facilities, and upgrade TCEP finished product to base oil.  The company has been growing while taking a more conservative approach with increasing the efficiency of their TCEP facility. They built their first TCEP facility in 2009 that was originally built to handle 45,000 barrels per month. I believe right now they can handle 50,000-55,000 barrels/month. Some investors were disappointed not to see more TCEP plants sooner, but I understand and appreciate their approach.

I met with Ben Cowart (CEO and 32% owner of VTNR) during a 1×1 at Sidoti & Company last month in NYC. Ben seemed very confident in the long term success of the company. He has put many years of hard work and has surrounded himself with a management team that has very strong depth. On the previous quarterly conference call Ben mentioned that they already have developed a blueprint of a new TCEP, just not sure exactly where it will be built. Investors are waiting for the related party transaction to be completed with Vertex Holdings. I’m not sure what the valuation will be of Vertex Holdings, but from my research I’ve found that it is comprised of 4 business units that are related to the public company. The private company consists of Cedar Marine Terminal, H&H Recycling, Vertex Recovery Business, and Cross Road Carriers. Vertex management team is staying focused and working hard to manage the gross profit of the company. The strategy moving forward will be to acquire the lower tier oil collectors that should help increase their gross margin. Implementing a vertically integrated strategy will allow them to not only increase their strong foothold in the southern Texas market, but also expand into new markets.

Heritage-Crystal Clean (HCCI): Heritage-Crystal Clean is the purest public comp to Vertex Energy. HCCI is only 20% larger by revenue, less profitable, and has a $286 million market cap. Heritage-Crystal Clean, Inc. provides industrial and hazardous waste services to small and mid-sized customers in the United States. Its services comprise parts cleaning, containerized waste management, used oil collection and re-refining, and vacuum truck services. HCCI is much larger by geography then Vertex with a network of 67 branch facilities with 94 used oil collection trucks. As soon as I looked at the company I noticed that it traded at a staggering 2x Sales and 165 P/E compared to Vertex’s measly 0.15x Sales and 3.5 P/E. Have you ever seen a comp this far out of whack? I have never seen such a thing. I started to look further into Heritage-Crystal Clean, Inc. and noticed that their revenues have grown from $98m in 2009 to $152m in 2011 but operating performance has been very poor.

Arabian American Development (ARSD): Arabian is what I would call a loose comp as it doesn’t refine used motor oil but it is a specialty petrochemical refiner/producer. ARSD owns and operates a petrochemical facility located in southeast Texas, which specializes in high purity petrochemical solvents and other solvent type manufacturing. Arabian is currently trading at 1x Sales and 20x TTM EPS. 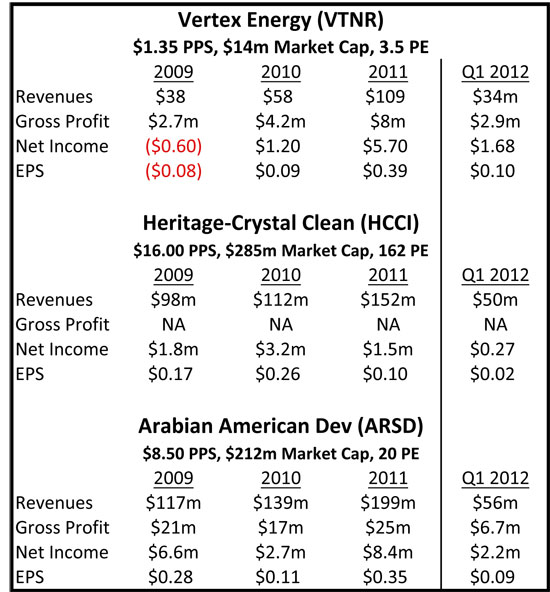 M&A has been heating up in the space: I traveled to Houston in October of 2011 and met with Vertex Energy to “kick the tires.” During my visit we talked about Thermal Fluids as the West Coast leader in waste recycling solutions. In April 2011,  Heckmann Corporation (HEK) acquired Thermal Fluids Inc. for approx. $245 million. Thermal Fluids has operations throughout the Western United States, with facilities and customers in 18 states, 31 facilities, a fleet of approx. 290 trucks and more than 230 employees.

Conclusion:  Vertex Energy is a fast growing, profitable business that is trading at a fraction of its peer group. I believe as the company continues to execute its business plan, completes its acquisition of Vertex Holdings, and hits the road to tell the Vertex Energy story this fall, the stock price will be revalued at much higher levels.