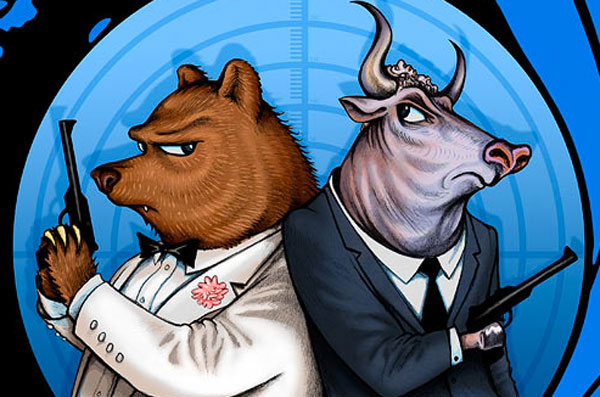 Let me begin by saying that my proprietary mix of six different internal indicators from www.decisionpoint.com remain on buy signals and the same goes for the other 4 internal indicators that I follow on TC-2000. However, there are some negative divergences among the internals, general technical observations, as well as some fundamental concerns that are worth noting.

Let me begin with the fundamental concerns. The quote below is from Jeff Saut’s (of Raymond James) weekly commentary dated 8/6/12.

“Regrettably, a strong earnings season has not been the driver of the upside breakout. Verily, of the 1,702 companies that have reported, the earnings beat ratio stands at 59.9%, well behind the S&P 500’s beat rate of 67.3% (376 companies have reported). Meanwhile, the revenue beat rate stands at only 48.2%. Yet by far the most troubling metric is the company’s forward earnings guidance, which is currently negative. Despite that forward guidance, the bottom up consensus earnings estimates for the SPX remain around $102 for this year and near $115 for 2013.”

I have to say that this was one of the most uneventful earnings seasons in quite some time. Q2 earnings and Q3 guidance stunk and as a result there have been very few “story stocks”. If I recall correctly this was the worst year over year comparison for quarterly earnings since Q2 2009. The key mention above is that only 48.2% of reporting companies beat on revenues and 59.9% beat on earnings. These statistics show a glaring point that has been the case since Corporate America began streamlining their operations during the downturn of 2008-2009. Corporate profit margins are near historic highs so I question just how much higher they can go. Given those thoughts if revenue growth is slowing it is going to be very hard for earnings to grow moving forward. Thus one has to question whether we will really get operating earnings (for the S&P 500) of $102 for 2012 and more importantly $115 in 2013. If the economy is slowing and thus revenue growth is slowing how in the world are earnings magically going to grow 13% in 2013 vs. 2012? Seems optimistic to me and I believe the 2013 estimates will have to come down.

Another big concern and I have hit on this in previous missives but the market isn’t really trading on fundamentals. It is trading on anticipated QE (money printing) from global central banks. Back in late-July I mentioned that I didn’t think Bernanke would give us QE III at their early August meeting and I was correct. I also mentioned that while both the ECB and Fed have been talking about the potential for QE III nobody has actually done anything since last year. Now look at the global equity markets since early-June. The rise has been very choppy but the market has made upside progress. It makes no sense at all from a fundamental perspective but as I noted earlier the market is trading on the ANTICIPATION of QE. Next week is Bernanke’s annual speech at Jackson Hole, WY. He used this speech to hint at QE II in 2010 and many are expecting the same this year. Unfortunately I think they may be disappointed.

Think about it this way. Heads of the ECB and Fed have managed to keep the markets moving up by jawboning about QE but haven’t actually done anything. Given that the market has been rallying for about 10-12 weeks now I have a hard time seeing anyone pull out any QE with the markets near their highs. If they did I think the reaction wouldn’t be very favorable as the markets have been pricing in this potential during this entire summer rally. Should any QE be announced in the near term I would have to think that the effects would be very short term and that the market could actually turn down after a brief spurt to the upside. That wouldn’t reflect very well upon the central banks so I have to think that it is unlikely that we are going to see any QE in the near term. So I guess the next two questions are:

1. When does the market call their bluff?

2. How does the market react if Ben continues to talk about potential QE but doesn’t actually do anything at Jackson Hole?

I don’t have the answers to those questions but it would seem likely to me that at the very least there should be some near term disappointment if I am correct about Ben not being ready to act with QE III. Don’t get me wrong, if there is anything I could be more confident about it is that massive amounts of money printing are coming from the global central banks. Particularly those of the developed world. However, it is clear based on the reaction of the markets following QE I and QE II that the best bang for the buck comes when equity markets are acting poorly and nobody is expecting it. That obviously isn’t the case at the moment.

Now let’s move on to the negative divergences within the market internals. The summer rally from the early-June lows has come on very narrow breadth. In other words a select few stocks are dragging the broader market averages higher. More stocks participating = more validity to the rally. Note below that while the S&P 500 hit a new cyclical bull market high (post 3/6/09) only 76% of the S&P 500 components were trading above their 200 day exponential moving averages. The figure was ~88% as the market was peaking back in March. It is also worth noting that the figure was decisively over 90% at the major market tops of both 2010 and 2011. In other words as this bull market has matured the participation of individual names is declining.

Now I want to move on to some general observations. The first is the general election cycle effect on the equity market. As you can see in the chart below from Bespoke Investment Group 2012 has basically followed the historical road map to a T. If this were to continue the market should peak somewhere around Labor Day and correct into October ahead of the election. 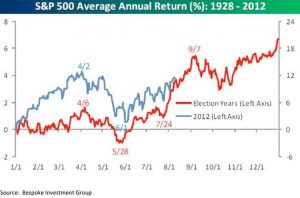 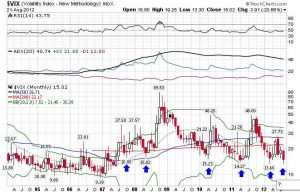 Let’s take a look at what the put/call ratios are saying. I’ll start by saying that I have followed these readings for about 11-12 years now. The OEX put/call ratio is usually the smart money and generally you want to align with what they are doing. On the other end you want to fade what the CBOE and Equity crowd is doing. Note that the 10dma of the CBOE and Equity put/call ratios are near the bottom end of their ranges. In other words the money we want to fade is complacent and thus would seemingly make the market vulnerable to a downturn. 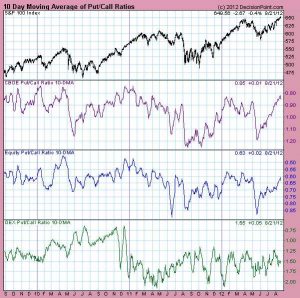 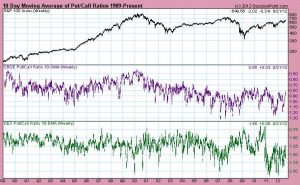 Now on to 2011 and beyond. Note that for the most part it has stayed above 1.25. The only moves below 1.25 came at the market bottoms in early-October 2011 and again in early-December 2011. Otherwise it has been well above the previous range since then and not quite as reliable. The big spikes above 2.00 in April 2011 and early November 2011 were reliable sell signals but the next spike above 2.00 in January 2012 was dead wrong. Long story short I still keep an eye on this indicator but it isn’t reliable as it once was. Important points to note here are that readings above 2.00 should be respected as potential market tops and readings below 1.25 should be respected as potential market bottoms. But why has the ratio been so elevated since the beginning of 2011? I have two theories:

1. Portfolio Managers are taking on much more protection than they have in the past as they don’t want a repeat of 2008-2009 which is bullish for the market. If they have protection, the less likely we are to get a nasty decline like we saw in 2008-2009.

Near term I think the big deal to watch for is how the market reacts to the Bernanke speech at Jackson Hole next week. If I am right and he doesn’t throw down QE III here it will be interesting to see if the market just throws a little 2 day tantrum like it did in early-August or do we get a larger correction? The election cycle would seem to imply a top of some degree between now and Labor Day followed by a correction into October. Market internals remain in buy mode but there are some negative divergences to keep an eye on. It will also be interesting to see if the VIX is once again marking a top for the S&P 500 or whether we are going into a lower volatility environment as we head into 2013?

This has been a very tough market to navigate over the past 12 months but I believe we will begin to get a bit more clarity as to where things are headed once we get through the election and into 2013.