At MicroCapClub we enjoy looking at microcap success stories so that as investors we can learn and try to formulate a blueprint of success for future investing. There have been several microcaps over the last few years that have gone from sub $1.00 per share to double digits ($10+), but many of those eventually stumble and end up coming right back down.  Far fewer have excelled over a ten-year period of time and are still performing well.  A couple weeks ago I wrote about Contango Oil & Gas (MCF) that has gone from $0.20 in 1999 to $56.00 today.  In this next microcap success story we will profile Medifast (MED) that has gone from $0.16 in 2001 to $29.00 today.

Medifast, Inc. (MED) is a leading United States manufacturer and provider of clinically proven, portion-controlled weight-loss products and programs.  The Medifast brand has been recommended by over 20,000 doctors and used by over one million clients since 1980. The Company is committed to enriching lives by providing innovative choices for lasting health. Medifast programs have been proven effective through studies by researchers from major university teaching hospitals. The company sells its products and programs via four unique distribution channels: 1) the web and national call centers, 2) the Take Shape for Life personal coaching division, 3) medically supervised Medifast Weight Control Centers, and 4) a national network of wholesale physicians and medical practices. Medifast was founded in 1980 and is located in Owings Mills, Maryland http://www.choosemedifast.com.

You never know what you are going to find when you peel back the onion on a company.  This past weekend, when I first started looking into Medifast, I was hoping to find a rags to riches story lead by a steadfast CEO successfully navigating the company through the unscrupulous waters of microcap. What I found was a soap opera of a company history combined with an equally volatile stock price history, so make sure you read the time line of events below.

The 1970s and 1980s was a boom time for the weight loss industry. It seemed like a new diet plan was born every day and everybody had an exercise mat for whatever the newest popular exercise regime was. In the mid- 1970’s Dr. William Vitale, a Baltimore dermatologist, began treating patients using the Opti-fast liquid-diet plan, but he had a hard time getting product from Opti-fast. Through frustration and sensing an opportunity Dr. Vitale literally got out his blender and started developing his own liquid diet formula. In 1979, he founded Jason Pharmaceuticals, managed by Dr. Vitale and his son James Vitale, to produce and market the new “Medifast” formula.

Jason Pharmaceuticals steadily grew revenues from $250,000 in Year 1, $1 million in Year 2, and in just a few years to $17 million annually.  Then the break of a lifetime happened in 1988 when Oprah Winfrey publicly lost 60 pounds on Opti-fast which lead to a flood of interest into the liquid diet industry. Jason Pharma sales of Medifast topped $51 million soon after which was the high point for the Vitale’s.  At the time Dr. Vitale was publicly boasting about his company’s success quoted as saying, “As most people know, some athletes make a few million bucks a year. My earnings are far in excess of that.”

Boom quickly led to bust as Oprah Winfrey gained her weight back and interest started to slide in the liquid diet industry.  To compound this, in 1990 several diet companies including Jason Pharma were brought to testify on safety risks of their plans and about allegedly misleading advertising. The company quickly became the target for product liability suits, and revenues went into free fall.  As sales fell the Vitale’s continued to spend on their lavish lifestyle even while laying off employees from 300 (at its peak) to around 55.

In 1991, the Vitales hired Daniel Santangelo, who head up the Slim-Fast division of Thompson Medical, but only 10 months later he was gone with lawsuits to follow. Jason Pharam’s landlord was also suing them for non-payment while alleging in court that Dr. Vitale and his three children received $7.3 million in salary and distributions from 1991 – 1992.

In a 1992 FTC Consent Decree the FTC found that Jason Pharma was guilty of false and misleading statements about the safety and efficacy of Medifast products and programs. Facing an increasing number of lawsuits Jason Pharma filed for bankruptcy in 1994.

In 1997, the board of directors of Healthrite fired MacDonald claiming he was incompetent. This started a proxy fight with the board which MacDonald won and regained his position as CEO in 1998.  Note: Important to note that Macdonald would again be removed as CEO in 2007 for suspected improprieties. Bradley MacDonald would remain the Executive Chairman of the Board until 2011 when he resigned for health issues. Bradley’s brother Michael MacDonald is now the Executive Chairman of the Board and CEO of Medifast.

In 2001, the company changed its name to Medifast and was on the verge of bankruptcy until they changed their business model to a multi level marketing strategy.

Medifast has grown rapidly since 2001, and the stock has certainly had its ups and downs as you can see in the yearly High-Low stock prices.  The stock chart below showing the years 2001 – 2003 is a very familiar chart for companies with impressive growth with a tight share structure where liquidity increases tremendously and the stock gets way overbought. In this case Medifast went from $0.16 in late 2001 to $18.00 in 2003. 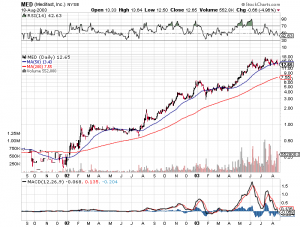 The company went through growing pains and had a couple earnings misses in a row and the stock came back down under $3.00 per share in 2005. 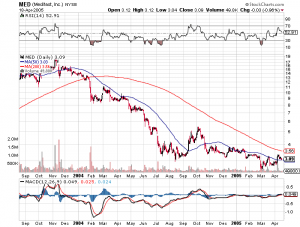 This is normally where the story ends for once highflying microcaps that crash back down to earth. I find very few companies that make the move up to $10+ and then back down to low single digits ever make it back above $10 again.  But Medifast did in fact regain its double-digit status in 2006 and hit $20.00 per share. 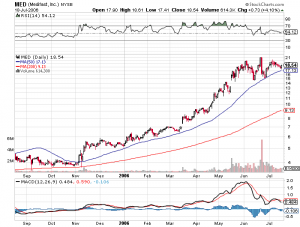 Then history repeated itself, a couple earnings misses, and the stock dropped back under $4 by 2007-2008. 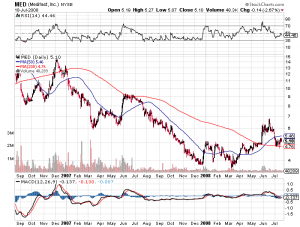 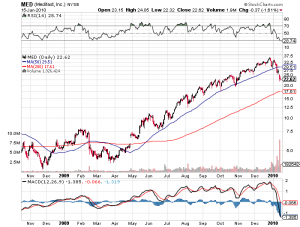 You remember that 1992 FTC Consent Decree with Jason Pharma?  Twenty years later, Medifast finally reached a proposed consent agreement with the FTC this past July.

As I said when I started this article, I went into researching the story thinking this would be a great wholesome microcap story, and instead found a soap opera of a history and stock price that was equally bipolar. This also is what makes Medifast so interesting because even with all the drama it is still one of the best performing microcaps ever.

Putting the drama aside Medifast exuded all of the traits common in very successful microcap to smallcap winners.  First, the company itself is/was in the middle of a large consumer trend where their weren’t many public microcap benefactors, thus creating a scarcity value for the stock.  In Medifast’s case it was the huge trend that was developing in the late 1990’s towards weight loss.  Second, most successful microcaps that become smallcaps have a very good share structure.  Medifast even today only has 14m shares outstanding, which means it doesn’t take much to move the stock up or down. Third, successful microcaps have very aggressive revenue growth (50%+/year) and earnings growth.  At MicroCapClub we are very aware of these three attributes when we look for the next potential big microcap to smallcap winner.

Note: It was hard to find an accurate history of the company.  I found these two sources very useful.