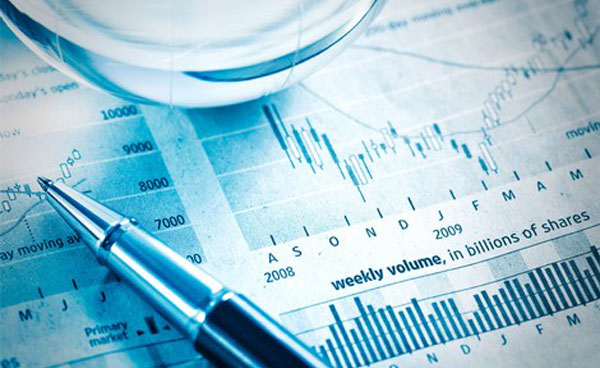 Neil Cataldi wrote about a discussion we’ve been having on the MicroCapClub members forum about how investors leg into their positions.  Several members contacted me on how I use technical analysis in the microcap world to aid me in my decisions to buy, add to an existing position, or sell a stock. After much thought all I can do is take this on a case by case basis and explain in hindsight why I made the decisions that I did.

Many believe that TA can’t be used in the microcap space. While one has to relax some of the rules the concept is the same. It is all about supply, demand, and trend. There are two big things that I look for when scanning charts:

Price spikes with gaps on volume are one of the most powerful patterns that I have in my 15 years of TA. Today I am going to look back to a stock that I bought earlier this year and am still holding today. Destiny Media (DSNY).

While the gap may show up on the daily chart go ahead and look back at the monthly chart. If the trend is up go ahead and proceed. As you can see prior to February of 2012 DSNY hadn’t sustainably been over $.50 in almost 4 years. One of the first things I noticed on the monthly chart was that the MACD was above zero and moving up. I also noted that the green line was above the red line on the ADX (second from the top). Thus the trend was up. Also note that the 20 month moving average had moved up through the 50 month moving average and that following a big price spike on some volume back in 2009 the price of the stock NEVER went back below the low price of that month which was $.30 or so. Thus the monthly chart is a go.

Now I want to move on to the weekly chart at that time. Start at the top and work your way down. RSI is above 50. Not a requirement but that is preferred. Also note that the weekly ADX lines are also bullish with the green line trending above the red. Also note that like the monthly chart the MACD is above zero and also on a bullish cross to the upside. Now here is another concept. Volume usually precedes price. Note that back in late-October 2011 there was a large weekly volume spike (3 million shares) and the stock price tested the $.50 level before turning back down. Now look forward to 2012 and note that before the stock broke $.50 with conviction there was a week in February where the stock traded 2 million shares and broke above $.50 during the week but failed to close above it. In my eyes this was confirmation of the move in October 2011 and a sign of positive things to come. The breakout on the upside came the following week and the stock is up over 100% from the breakout at $.50 to the most recent high at $1.06. 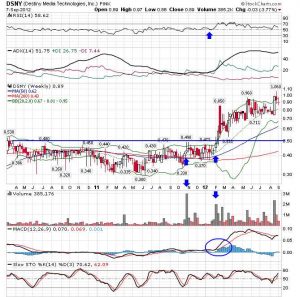 In this chart I have actually gone back so you can see exactly what I saw before the stock broke out on the daily view. You can see the increased volume in late-October/early-November in more detail here. Also note the 3 big volume spikes before the stock actually broke above $.50. As I indicated earlier as long as the uptrend remains intact this should be viewed as a signal that a breakout will eventually come on the upside. Another key to this chart that I really liked was the fact that the 50 day moving average (blue) was moving along above the 200 day moving average (red) but their slopes were similar. This is a set up that I really like to see. The last thing to note on this chart is that the 20 day moving average (dashed middle line) broke above the 50dma BEFORE the breakout above $.50. Very bullish. 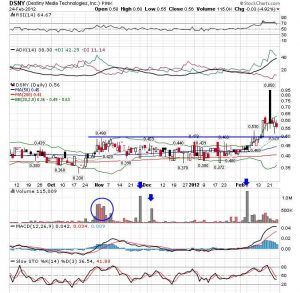 Now let’s fast forward to what the chart looks like on a daily view as of today’s close. Remember how I said that I really like gaps? First of all let me explain a gap. A gap is essentially a virgin area of price. Note that on May 21st the stock gapped up from the prior close. The bottom of the candle on 5/21 is above the close of the prior trading session. While it didn’t initially come on big volume it turned into just that over the coming 3 trading sessions and the stock moved up quickly to $.96. Now note the price action since then. Note that while price has tested the $.70-$.74 area 4 times since the gap up it has NEVER gone below $.70 and thus the gap up from $.69 remains intact. If one remained bullish on the fundamentals these retracements below $.80 would have been viewed as opportunities to add to your position. Note that after the most recent testing of the low at $.74 the stock then surged up to $1.06 on huge volume. Since then the stock has consolidated on light volume. While DSNY is a bit overbought and testing big resistance at $1.00-$1.08 the overall technical picture here is beautiful. If one is still bullish on the fundamentals of DSNY the technicals certainly suggest that there is more to come here on the upside. It may take some time to consolidate the most recent gains (and let the 50/200 day moving averages move up which helps relieve the overbought condition).

I hope you found this helpful. If anyone has any questions I will be glad to answer what I can.
The MicroCapClub (mc2) is an exclusive micro cap forum focused on micro cap companies (sub $300m market cap). The MicroCapClub was created and founded by Ian Cassel as a way to share ideas and to learn from other seasoned like-minded micro cap investors. Our goal at MicroCapClub.com is quality membership and quality stock ideas.  If you are an experienced micro cap investor, feel free to Apply today.