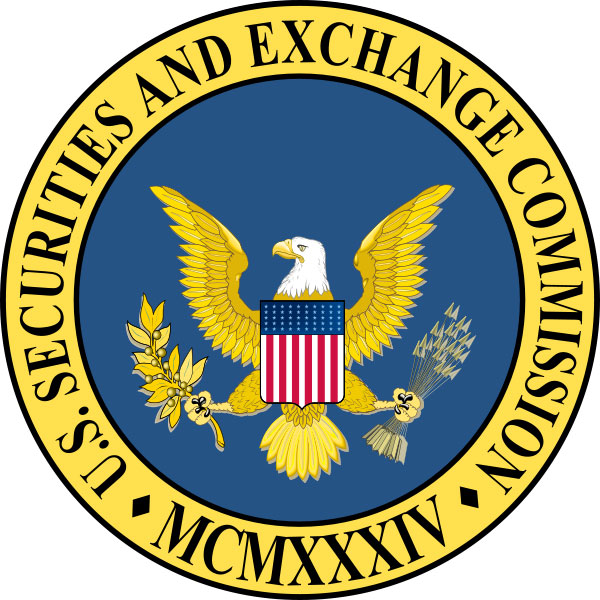 Tighter spreads, but less liquidity. That may be the outcome of a rule change by the Financial Industry Regulatory Authority affecting the over-the-counter market. The changes to FINRA’s Rule 6433 promote competition between limit order traders and market makers by loosening the requirements for quoting. As a result spreads could tighten and quoted size could decline.

The rule was approved by the Securities and Exchange Commission in June and will go into effect on a one-year pilot basis from November 5. 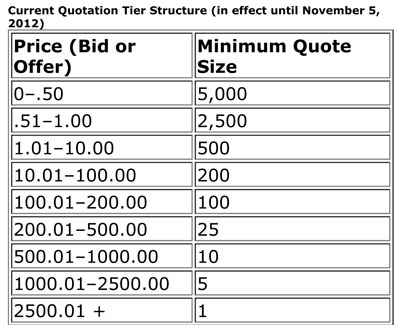 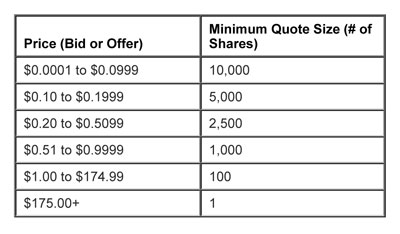 “We predict a reduction in displayed liquidity,” said Cromwell Coulson, president and chief executive of OTC Markets Group, which operates the quotation infrastructure for the over-the-counter marketplace. “But we’ll see.”

The changes to Rule 6433 reduce the number of shares traders must put up when they quote OTC names. Under current rules, for example, market makers must post at least 2,500 shares when quoting stocks that trade between 51 cents and a dollar. Under the changes, they need only post 1,000 shares.

While the minimum quote size in the market for listed securities is 100 shares, it varies for OTC names. That’s because the majority trade for less than $1. As the price of the security declines, the minimum quote size increases. The object is to keep the dollar value of the quote relatively constant. Currently, the market operates with nine quote tiers. The rule changes reduce that to six tiers.

The changes to Rule 6433 make it cheaper to quote, an advantage for individual investors as well market makers. Currently, the rule applies only to market makers, but is being expanded to include limit order traders. In the OTC market, these are typically retail investors.

That makes one brokerage executive happy. “We applaud FINRA and the SEC’s recent rule changes and reforms,” said Barry Scadden, a vice president with Arca Edge, a unit of NYSE Euronext, and an ECN that operates in the over-the-counter market.

“By simplifying the existing tier structure and lowering the minimum quotation tier size requirement for thousands of OTC Equity Securities, we believe this rule will enhance transparency while affording individual investors the ability to have more of their limit orders displayed.”

In an environment overwhelmingly dominated by market makers, Arca Edge has made strong gains in market share in recent years. On a recent day, the ECN was the single largest trader, as ranked by dollar value, and the third largest, as ranked by number of trades. Otherwise trading is controlled by such registered market makers as Knight Capital Group, E*Trade, and Citi/Atd.

Arca Edge has made its mark in the over-the-counter market’s higher priced stocks, according to data from OTC Markets’ website, precisely the group of securities most impacted by FINRA’s new rule.

A study conducted by FINRA, and later corroborated by the SEC, showed that a large chunk of limit orders left with brokers for stocks trading between 51 cents and a dollar were not being posted. If the rule changes had been in effect during the period of FINRA’s analysis, the regulator predicted the share of posted limit orders for these securities would’ve surged from 47.5 percent to 73.8 percent.

For all price tiers, the increase is expected to be less dramatic. If the rule changes had been in effect during the period of analysis, the share of total posted limit orders would have grown from 85 percent to 96 percent.

Limit orders have only become a mandatory part of the over-the-counter market since last year. Then, FINRA Rule 6460, modeled on similar rules covering listed securities, forced dealers to display their customers’ limit orders. The intent was to put customers on a par with dealers and to reduce spreads. The changes to Rule 6433, in turn, are intended to make it easier for limit order traders to display their quotes.

While many-including the SEC-applaud the leg-up the rule changes give to limit order traders, others fret that displayed liquidity will shrink. Coulson, for instance, predicts over half of the 10,000 securities quoted on his platform will see a reduction in posted size.

Indeed, the SEC rejected FINRA’s first proposal, after complaints by OTC Markets and Knight. FINRA was forced to revise its proposal, effectively targeting a smaller swath of securities. The regulator worked with Knight in revising its proposal, and Knight eventually told the SEC it was satisfied with the changes.

Despite FINRA’s eagerness to promote the interests of limit order traders, it acknowledged the dangers of reduced liquidity. That’s why it chose to make the changes on a one-year pilot basis. If the regulator deems the changes have harmed the OTC market, it would “consider rescinding the pilot,” it stated in its proposal.

For Coulson, the pilot is a tonic. “Instead of being a permanent rule change, it’s a pilot,” he said. “We get to see what happens. Instead of having opinions, we’ll have data.”