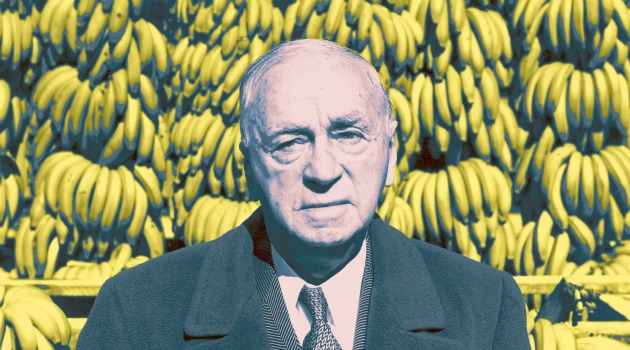 This book is about the life of Samuel Zemurray, the Banana King.  You know the phrase, “Banana Republic”, well Sam invented it. Let me first say that I’m embarrassed to say I’ve never heard of the man before reading the book, and yet his business accomplishments rank right up there with the greats. When you look back at the turn of the 19th century, these were the years of the business titans. Rockefeller with Oil, Carnegie with Steel, JP Morgan with Electricity, Ford with Automobiles, Vanderbilt with Railroads, and Sam Zemurray with Bananas.

Sam immigrated to America in 1891 with absolutely nothing and became one of the richest men in the world.  Sam made his fortune in the banana business. He started at the very bottom and due to his relentless worth ethic and lack of ethics, rose to the top. To give you a sense of the size and scope of his control later in life:  By 1942, Sam via his interests in the United Fruit Company owned and controlled 75% of all private land in Guatemala, controlled 75% of all trade, and owned almost all of the roads, power stations, phone lines, seaports, and every mile of railroad in Guatemala.  And this is just one country.

The reason most of us have never heard of Sam Zemurray is the tactics he used to gain such power and influence and the things he was willing to do to protect it. Such as literally hiring a private army to overthrow the government of Honduras in 1911, and overthrowing the government in Guatemala in 1953 (with the support of the US Government!).  Sam had just as many US government officials on the payroll as he had employees.

The book reads like a novel, and as soon as I picked it up I couldn’t put it down. The book provides a great history on the fruit trade and the rise of Sam Zemurray, The Banana King.