In the opening pages of the most recent edition of The Journal of Petrotech, the Chairman and Managing Director of ONGC, India’s National Oil Company with revenues of $30 billion, extolled the virtues of technology to his industry.  In particular he highlighted three companies with “savvy pioneers placing huge bets hinged on disruptive technology that have found crucial support from established industry players.”

The first company mentioned was NXT Energy Solutions who he states:

“…claim to raise the success of first – pass prospecting for trapped hydrocarbon reserves underground by up to 70% by deploying their unique ‘Stress Field Detection Surveys’. Pioneering companies such as Ecopetrol and Pacific Rubiales have already adopted it .”

Members of the MicroCapClub were already familiar with the company. NXT was one of the early write‑ups on the site and an active discussion has followed on our forum. Today we will highlight the company on the main blog.

NXT Energy Solutions (TSX-V: SFD, OTCBB: NSFDF) as mentioned provides aerial surveys to the oil and gas industry with their proprietary Stress Field Detector (SFD).  Their technology can identify prospective trapped reservoirs at a fraction of the time and cost of seismic.  To be clear the SFD does not determine depth, and hence seismic work is needed to define the drilling location. But by eliminating non‑prospective areas within a given block companies can save significantly by focusing their efforts on the 5% of their land actually prospective for trapped reservoir.

For example, seismic in remote terrain regularly cost $30,000/km and can get as high as $100,000/km in parts of the world. An SFD survey costs $1,400/km representing a sizeable savings. Moreover, since surveys are completed at 10,000 feet from a jet aircraft, companies can obtain data quickly before even putting a foot on the ground. That is extremely advantageous when working in areas that are environmentally sensitive or potentially dangerous.

A visual of the SFD sensor output shows the power of the technology. Below is an actual SFD signal response over the Rubiales Oil Field, which is the largest in Colombia:

Needless to say a tool that can cut exploration time by years, reduce costs by millions, and reduce exploration risk by identifying reservoirs should find plenty of business. Combine that with a high margin/low capex business model and you have the potential for a phenomenal investment.

After a storied history, NXT is transforming itself into a respected service company focused on Latin America. Prior to 2012, their best year was 2007 when revenue hit $5.3 million and they appeared to be gaining traction in their domestic market of Canada.  However, the 2008 financial crisis and the ensuing drop in natural gas prices forced the company to find a new market as domestic exploration dollars evaporated. A decision was made to focus on Colombia in order to gain a foothold into a region of the world where their services had tremendous value.

They were rewarded for this effort in 2009 with a $2.3 million contract with Pacific Rubiales (TSX: PRE), at the time the largest independent oil company in South America.  The company continued to perform pilot projects for other respected companies such as BP Colombia and Ecopetrol and waited while the results of their recommendations were proved out at the drill bit. Recently the company released to the public results of their preliminary work in Colombia.

They show an outstanding record indicating 1.26 Billion Barrels of Original Oil In Place have been discovered in just 3 years on SFD prospects:

As a result of these initial positive results, in 2011 Pacific Rubiales became a repeat client signing a $4.6 million Letter of Intent covering 6 blocks in two countries (Guatemala and Colombia). The first $3.6 million of this contract was completed early this year. This was followed by a $1.65 million contract with a private company in Argentina.

Then, on the back of this success, in September 2012 NXT announced their largest single contract to date: a $4.73 million survey with Petroleos Mexicanos, or PEMEX, the National Oil Company of Mexico.

After completing the initial flights in Mexico in September, NXT announced an additional small contract in neighboring Belize with a separate private company.  A few weeks later in early October, PEMEX expanded their initial survey by $1.04 million bringing the total to $5.8 million. This extension was the maximum dollar amount allowed under the terms of the original contract.

All‑in‑all NXT will finish the year with revenue of $11 million in 2012. It’s the best year in the history of the company. Looking out to 2013 and beyond the future could be bright: 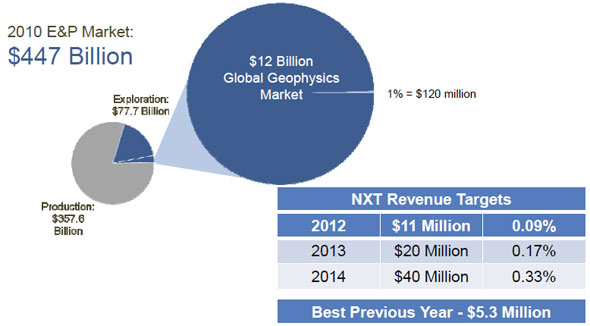 With low capex, 70%+ gross margins, and a burn rate of approximately $1.2 million/quarter this could be a very profitable company. If the $20 million revenue target is hit, back of the envelope calculations show that you would have more than 20 cents/share fall to the bottom-line.

Next quarter alone, the company will recognize the $5.8 million in revenue from PEMEX and, using the assumptions above, earn $2.81 million of net income (or $0.06 cents a share) in just 3 months. That’s a tidy profit for a company recently trading below $0.80. [Note:  the company is not yet a taxpayer and will not be for some time due to past operating losses.]

NXT is forecast to end the year with $6 million in cash and no debt. Current backlog includes a $2.63 million contract in South East Asia as well as the $1 million survey remaining on the LOI with Pacific Rubiales.  They are clearly hopeful larger repeat contracts will be coming from PEMEX pending a successful delivery of results. And as the company continues to add clients acceptance should snowball. For example their VP of Sales was recently quoted in an article stating that they are currently fielding enquiries from across the globe from “Cape Town to Papua New Guinea to the Arctic.”

Further out there is upside even beyond these numbers. In previous contracts in Canada they were able to negotiate a Gross Overriding Royalty (GORR) on prospects they identified during surveys. NXT currently has a 1.5% GORR in the Horn River Basin where drills have unfortunately been postponed due to low gas prices. As the technology becomes more accepted in Latin America and across the world, look for the company to once again negotiate these GORRs into contracts.

They also possess over 40,000 km of data they have flown for their own account acquired flying to and from surveys in Latin America (the sensors are always on). This is another high margin potential revenue stream as data acquisition costs have already been absorbed. Alternatively, joint ventures could be formed to exploit the best prospects with NXT keeping a percentage of what’s in the ground.

If the company can execute on current contracts and grow revenue by adding new clients, 2013 will indeed be a breakout year for both the company and their stock price.

Clearly some of our members think that’s exactly what’s in store.