Microcap stocks and small developing companies face numerous risks throughout their growth. Some are tactical or related to operations, while others are strategic and could impact the life of the company. Make a poor tactical choice and it may cost time and money, make a bad strategic choice and it could doom the company.

One critical strategic decision is made at that point in the growth curve in which customers begin to change from early adopters to early mainstream. This shift was defined as “Crossing the Chasm” by Geoffrey Moore in his 1991 book of the same name.

Moore demonstrates that a companies’ ability to effectively manage this critical time will have dramatic impact on the success of the company.  Crossing the chasm occurs at the bend in the growth curve, or at the “inflection point”.  It is at this point that revenue can ramp dramatically or begin to show restrained growth Q/Q.

Moore “argues there is a chasm between the early adopters of the product (the technology enthusiasts and visionaries) and the early majority (the pragmatists). Moore believes visionaries and pragmatists have very different expectations, and he attempts to explore those differences and suggest techniques to successfully cross the “chasm,” including choosing a target market, understanding the whole product concept, positioning the product, building a marketing strategy, choosing the most appropriate distribution channel and pricing”.  – Wikipedia 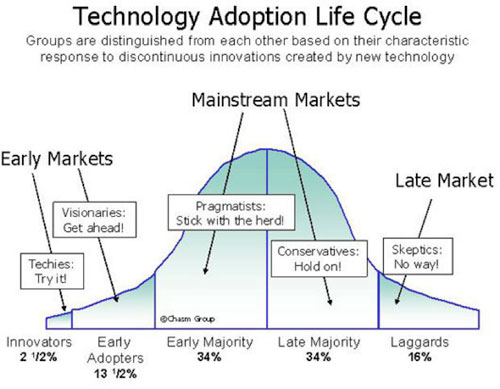 The technology adoption life cycle, or “diffusion theory” is the underlying thesis for company growth, while crossing the chasm is the point between early adopters and early majority.  One can see that a primary reason for the importance of this stage is the entry into large customer volumes that will lead to significant revenue. Mainstream markets make up on average 68% of potential customers.

Venture Capitalists often demand some insight into vision for entering the mainstream. Strong long-term business plans will address the issues of crossing the chasm, even when the company is still in its infancy.  In performing due diligence on micro-cap companies, potential investors should also consider the impact of crossing the chasm.

So, what should be considered when conducting due diligence around the chasm? Buying behavior, product needs, relationship, support, benefits,  process, and people

In crossing the chasm, companies must always look out for the skeptics, or laggards.  I always called this group, the curmudgeons.  And I would suggest that if I could turn the curmudgeons, I would ultimately win, since everyone knows it.

This group is pretty much anti-everything. They want to maintain the status-quo, argue the benefits, disbelieve any marketing “hype”, seek to block purchases, and in general, put up stiff opposition to early adoption. And, for whatever reason, these people have a vocal seat on the buy committee, a place at the table on early sales meetings, and more.

Even though they may be the last to buy and the hardest to sell, if the curmudgeons want it,  they often become your best salesman and adoption can proceed from both ends of the adoption cycle.

All in all, companies face numerous challenges from other strategic and tactical issues. They face “milestone challenges” at the cracks within the adoption cycle defined by type of customers. The chasm is a prominent milestone challenge and is significant because it occurs early in the life of a growing company. The chasm offers numerous individual obstacles that could hamper development, or one big challenge that could kill it.

Crossing the chasm has been notable since its definition in the early 90”s and it is still applicable as a business management issue to address. Have you ever been involved with a company that had a great product, but it didn’t go anywhere after a few key sales?  Have you ever wondered why your company that was doing so well but all of a sudden crashed? Have you scratched your head as your “good” company’s sales started to slow at what you thought was the inflection point?

Keeping these issues on the table during due diligence could aid in your evaluation of potential, and ultimately on your ability to make money on a particular opportunity.

Lastly, let me suggest how a few companies that I am long on stack up against the chasm.

As a reader, if you have any stocks that you are watching that you would like to map against the adoption cycle and/or the chasm, feel free to comment.