Over the last couple weeks, Barron’s and several other financial publications have written about the recent outperformance by microcaps.  I’ve been following the microcap space for a decade, and I too am intrigued with the latest move in microcaps. Of course the question: Is this the start or the end of the run in MicroCaps? 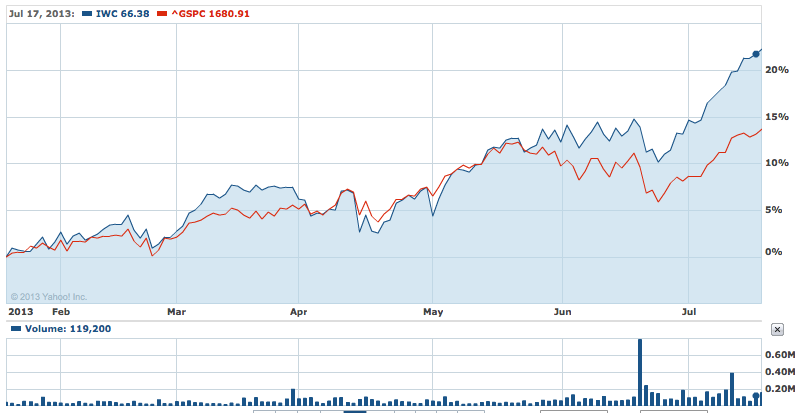 As you can see the in the chart above, the Russell MicroCap Index (IWC) has significantly outperformed the S&P since mid May.  Historically, the IWC has followed the pattern (see chart above pre-May) of overshooting to the upside and to the downside when compared to the S&P. In May, when the S&P moved lower, microcaps held their ground. This break from the pattern is rather noticeable. This could be just some random aberration, but I believe it could be the start of a longer-term sustainable rise in microcaps.

As I wrote in the opening paragraph, the whole microcap space is $300 billion.  Of this, approximately $100 billion is in the hands of company founders. This leaves $200 billion for the investing public (source). Compare this with the individual market caps of Exxon Mobil (XOM) $423 billion, Apple (AAPL) $398 billion, Google (GOOG) $297 billion, Berkshire Hathaway (BRK-A) $293 billion, Microsoft (MSFT) $262 Billion, Johnson & Johnson (JNJ) $259 billion, and Wal-Mart (WMT) $255 billion. Each one of these megacaps trades over $1 billion in volume per day. The cash and investments that Apple is sitting on is enough to buy more than half of the public float of every microcap that exists.  Point being, it won’t take much in regards of capital inflows to move the entire microcap market.

MicroCaps are small businesses, and small businesses are the chief job creators, idea makers, and producers of the US economy. The government realizes this too with the successful passage of the Jumpstart Our Business Startups Act or JOBS Act, which looks to ease restrictions for companies raising capital through means such as crowd funding.  Two weeks ago, the Securities and Exchange Commission voted to allow start-ups to start advertising their securities offerings directly to potential investors, a major step forward in the implementation of last year’s JOBS Act. Allowing accredited investors to pool resources and fund emerging growth companies could be the match that ignites the microcap space.  This will most certainly bring in a significant new wave of capital into microcap market.

Microcaps make up the majority of public companies that exist and yet very few investors even look at the space. The mainstream financial press broad brushes the space as not investable. The microcap arena is risky and filled with bad management teams, business models, and even fraudulent companies.  I’ve written several pieces on several pump and dumps over the last couple of years. but this is the minority of companies. The fact that no one really looks at microcaps is exactly why the microcap market is so inefficient. You can get an edge simply by knowing a company exists.  There are plenty of legitimate microcaps with great businesses.

One of the best qualities of microcaps is that they can really buck the trend of the macro economy and stock market.  During the greatest financial disaster since the great depression (July 2008 – April 2009), the DOW and S&P were down 50%, and yet a microcap like ZAGG (ZAGG) was up over 250% during this timeframe.

Microcaps are the ultimate stock pickers playground. They march to the beat of their own drum because in most cases their businesses are so small that the larger macro forces don’t affect them. In many cases China could fall into the ocean and cease to exist, and many microcaps would continue on business as usual like nothing happened.  Obviously I’m half joking, but in most cases the macro economy plays very little into microcap stock selection.

As the founder of MicroCapClub, I get to see the activity level in the microcap space from an interesting vantage point. Our membership is an eclectic one just like the companies we invest in. We have peanut farmers and construction workers as well as $10 billion funds as members. Only in the last six months I have seen very large private equity funds looking down the food chain towards the microcap arena. I believe the larger investment community is waking up to the fact that more value can be found in these tiny public companies than almost anywhere else.

In conclusion, microcaps have had a great run since May, breaking away from the normal correlations with the S&P.  Microcaps make up a majority of the public companies that exist, and yet they are undiscovered and represent one of the last inefficient investment asset classes. We are starting to see significant capital inflows into microcaps, and with only $200 billion of public float, it won’t take much to raise the tide of the whole space.  By the beginning of next year, we should start to see a flood of new capital via JOBS act approval of crowd funding entering microcaps, which could spark a historic run.  Microcaps are risky, so it’s important to do your due diligence. If you would like to learn more about microcaps, [HERE] is a list of educational articles covering a variety of topics.