Due diligence that goes above and beyond can often give you an edge that can yield large returns in the microcap space.  Most astute investors read quarterly and annual financial statements, but I find very few go beneath this first layer of due diligence. In a four part series Sean, Neil, Jason, and I will give you a few recent examples of in-depth due diligence, and how it ultimately helped in making an investment decision. The company examples in each part are meant to help illustrate the DD and not meant to be stock recommendations. In Part 1, Sean Marconi talked about his due diligence into XPEL Technologies, and now we bring you Part 2….

The process of due diligence comes in many different forms and for me, changes based on the type of company I’m looking at. Between my partner and I, we have over 125 management interactions per year. To us, that number is a healthy amount and allows for us to digest the information properly before deciding which companies warrant further consideration.

I was at a conference in New York City during September of 2012 when a colleague suggested I demo a new audio technology developed by a company called Parametric Sound (PAMT). I had pre screened the companies presenting at this conference and had not found anything interesting about Parametric Sound before hearing the demonstration. However, as is the case sometimes, trying new technology and being able to see it or hear it can allow for one to further grasp its capability and potential adoption. That was the case with Parametric. I was completely blown away by the three dimensional all encompassing sound and immediately thought to myself, I want to own a set of these speakers. If I responded this way, I felt many others would as well.

It was at this point that my process began, a process than can sometimes take weeks or even months. With Parametric, I was interested quickly and thought the valuation at ~$11/share was worth my time. My interest was further peaked when the valuation was cut in half the following month without any news, later bottoming below $5 in early December. The company was, for the most part, still pre-revenue and in the licensing stage of commercializing its technology. Without true fundamentals, Parametric was difficult to value, not to mention volatile, but that in itself created an opportunity. They were ramping sales through digital signage applications on a smaller level but the lion share of future growth would come from consumer electronics and in licensing to household names such as Samsung, Sony, etc. My diligence process involved a number of components. One, I needed to determine whether the technology was truly unique and also whether there were other similar offerings in the marketplace (or soon to be). Two, I needed to speak with management which is always a necessary component of the research process. Questions are prepared far in advance and address all pertinent matters regarding the company. And three, I wanted to experience the technology further hopefully in different applications.

The result of my initial inquiry into the competitive environment yielded inconclusive results because while peer companies couldn’t offer the same solution, I found other audio companies profiling new and advanced forms of surround sound. Even further, the directional component that made the offering especially unique was developed and available on a low grade level on the internet via less reputable sources. The technology as a whole had been around for years having been first developed and owned by a company called LRAD Corp (LRAD) before being spun out into Parametric Sound. I soon realized that many people did not look at this technology favorably due to its past history. As an investor always seeking the next great idea, I try not to be turned off by what may appear as a consensus opinion and in this case, I was rewarded for my contrarian approach.

As the diligence process continued, I was further intrigued when we learned that the audio clarity and volume had progressed to a new level where commercialization on a mass scale was now possible and soon to be a reality. This differentiated the company in some ways from its peers as well as the less reputable sources mentioned before. In order to justify what I viewed as the opportunity set, I wanted to 1) hear of the technology embraced by a large company in some capacity and 2) wanted to see it again myself. To an extent I had a level of comfort with the first part as the company communicated material increases in licensing negotiations, whether it was NDA’s they had signed or simply a defined timeline for licensing news, which they stated would come by the end of March, 2013 (only a few months away). At this point, the diligence progress took an additional step forward that in many cases I feel is necessary when researching companies that offer products to the consumer. 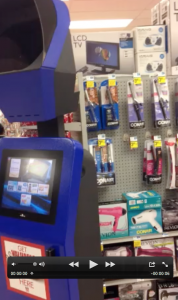 Parametric Sound was in a trial with Rite Aid (RAD) stores offering the sound technology in a retail kiosk that customers could use to view promotions, print coupons, etc via an in store experience. They were also in a trial at select Build A Bear stores at the time which presented a similar but different application. I traveled to Los Angeles in December of 2012 to see the technology first hand at a Rite Aid. The experience yielded both greater conviction in its potential adoption, as well as a very practical example of how it could be used in a public retail setting. During early 2013, I also learned that a McDonalds (MCD) store location in California had installed the speakers in their dining section as a way to create multiple zones that would offer different visual and audio content to their customers. Though the location was at first difficult to find, I was able to locate it and subsequently sent a friend who lived nearby to both videotape the installations, as well as diagram the layout of the store. This stage of the diligence process could be called an inflection point as I now had multiple hands on experiences to point at regarding adoption. With the stock trading far below its peak valuation and with multiple near term catalysts approaching, I viewed the risk reward profile as extremely attractive. The process was rewarded as in the months to come shares would rise from the low $4’s in December to $21 by April.

Interaction with management is by far the most valuable tenet of my process. However, if you overlay those discussions with other practical experiences (examples include site visits, demonstration of a product or technology, channel checks via reseller relationships, etc), you may find both information positive and negative that can influence the decision set one faces on valuation and ultimately giving an investment the green light. The power of due diligence takes on different forms with all investors but one should never stop short of seeking new information every day because with every day comes new opportunity for data that can influence your investment.

Further due diligence on Parametric Sound and more than 170 other microcaps can be found in our MicroCapClub members forum. Stay tuned for part three of The Power of Due Diligence Series.

Disclosure: Neil Cataldi holds no position in any company mentioned.