Talking about your winners all the time might lift the ego and attract lemmings, but it will do little towards gaining the respect of your peers. I picked the right stock, it went up, boy I’m smart and wasn’t that impressive. No, what I truly enjoy talking about most are my losers because I’ve had plenty of them, and I believe lessons can be learned from analyzing the losers. I’ve been a full time microcap investor since 2008, and I still make stupid mistakes. The key is learning from your mistakes. The difference between Major League Baseball players consistently hitting .230 versus .330 BA is $15-20 million per year. Keeping your losses small in the portfolio is just as important as holding on to your winners.
One of my first big losses came in 2000. I swear I was trying to lose all my money as fast as I could. I bought a tech stock at the top of the internet bubble based off a brokers recommendation. As the stock dropped I was told to dollar cost average, so I bought more at $100, $80, $60, $40, $10, and $5. The stock eventually fell to $0.32 per share, and I gave in and sold at $0.55. I ended up losing 97% of my investment. In the Guinness Book of World Records, my name is highlighted next to Quickest Loss, and Biggest Sucker. This wouldn’t be the last time I would lose almost everything, but losing money is a great educator and motivator. These early losses are what eventually guided me to microcaps, and a year or so after this big loss is when I met my first microcap CEO.

The reason why we love microcaps is they are one of the last investment classes where you can get an edge. That edge is information, and it may simply be nothing more than knowing a company exists. The information edge goes both ways.  Not only can having an edge get you into a position before the masses, but it can also get you out of a position before the masses sell. When events occur that challenge and change your investment thesis, the fact that you are aware and sell quickly can save you lots of money.

All investors struggle with justifying or rationalizing their positions. I can’t tell you how many times I’ve held a position way too long after something negative happened.  Instead of selling based on my gut instinct, I rationalized my position, convincing myself to hold or maybe even buy more. In almost all of these instances I lost a substantial amount of money. When you know your positions better than most, you’ll know when the story changes. When the story changes it’s almost always time to sell. Don’t rationalize your investment. When the investment thesis starts cracking, you start to sell because everyone else will when it becomes obvious. Here are a few real life examples when rationalizing my position cost me hundreds of thousands of dollars: 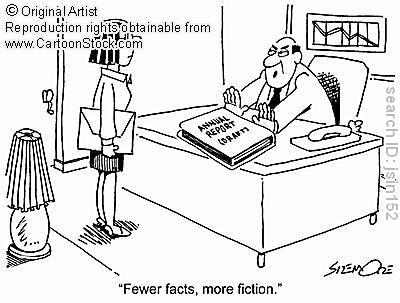 Example #1, Sudden CFO Departure: On more than one occasion I’ve been a shareholder in a company where the CFO suddenly resigns.  CFO’s leave companies all the time, but it’s important for the company to telegraph the departure months before it actually happens so shareholders aren’t surprised.  Bad things can happen when a company provides little warning. When a CFO resigns, questions get raised, Are the financials in order? Is there fraud? The types of questions that if true can completely derail a stock. In many ways this is worse then even the CEO resigning suddenly. When a CEO suddenly resigns, most people just think he probably got caught sleeping with the secretary or something (Just kidding). Heck, in certain situations the stock might even rally if a CEO resigns 🙂  A few years ago I held a position after a CFO suddenly resigned. I thought it was odd because I spoke with management frequently and I never got the impression they were searching for a new CFO. I convinced myself to hold while the stock dropped. A month later the auditor resigned from the company, and the stock got cut in half.  A month later most of the board resigned. Two months later the stock went to zero. This is an extreme example, but I’ve found in these scenarios it is much better to shoot first (sell) and ask questions later. 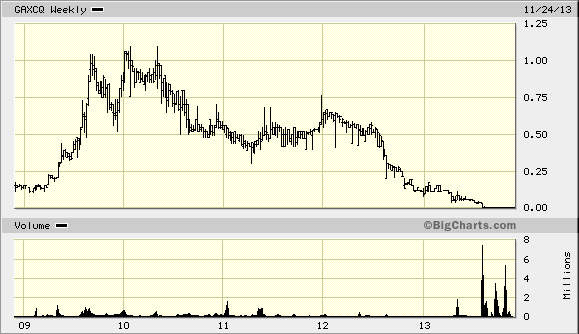 Example #2, Industry – Consumer Shift: In 2009, I bought a 3-4% position in a company called Global Axcess (GAXCQ) between 0.40-0.60. The company managed a portfolio of 5,000 ATM’s machines across several states. If you know much about the ATM business, their profitability is inverse to fed funds rate changes because the cash they put in the ATM’s is borrowed. If the fed increases the fed funds rate, it basically squeezes the margins of the ATM operators and vice versa. As you remember, the fed funds rate was lowered significantly in 2008-2009 to thwart an economic depression. This was inherently good for GAXC’s ATM business.  I bought the stock because of increasing margins of the ATM business, but soon after management announced an exciting new venture. At this same point in time RedBox DVD Kiosks were bursting onto the scene and their growth was exploding. GAXC thought why not leverage their ATM experience by rolling out DVD kiosks. It sounded good to me. RedBox was a hot stock and if little GAXC could be successful rolling out their DVD kiosks, this is something that could really increase the valuation. On the news of entering this space, GAXC stock went over $1.00. Literally within a few weeks of GAXC entering the DVD kiosk space, NetFlix (NFLX) started to really gain traction, which instantly sucked the buzz out of the DVD kiosk plays.  You could just feel it.  As a shareholder, I’ve never been in a company whose opportunity opened and closed literally within a couple months like that. The industry shifted. The difference between an industry/consumer tailwind vs headwind is huge. It’s the difference between a 50 PE and an 6 PE. I waited too long rationalizing my position, but I should’ve sold it immediately. The debt the company took on to fund the DVD kiosk expansion eventually bankrupted the company. 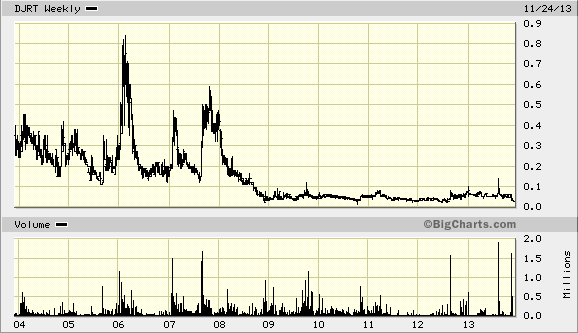 Example #3, Economic Shift:  In 2007, I bought a big position in Dale Jarrett Racing (DJRT) between 0.10 – 0.20. The company operated an authentic NASCAR racing experience at several racetracks around the United States. I took several friends and family from PA down to Talladega Motor Speedway in Alabama to experience the thrill of racing 180 mph in authentic stock cars. Everyone loved it. It was exhilarating. I liked the company because it was profitable and trading at a $3 million market cap. If the company was successful in marketing and filling up their racing days at the track the company would become very profitable. There was also talk of partnering with a major casino or brand and building a track in Las Vegas. Remember this was 2007 and Las Vegas was in full bubble mode.  The company was going to significantly increase their advertising dollars over the winter of 2007-2008 to fill up more track days in 2008.  By my calculations, if the company increased their racing days as much as I thought, the company could earn another 0.02-0.03c EPS, and this could be an easy 4-5 bagger.  If you remember we started to see the economy start to get sluggish around this same time while the company was aggressively advertising. Consumers were just not willing to spend on luxury purchases such as this when the economy was heading into free fall. I justified the position and held on, and the longer I held the lower the stock fell.

We all take losses from time to time, but the important thing is learning from them. In most of my large losses I ended up rationalizing my position. When you start to see signs of weakness in your investment thesis, it’s human nature to try to justify that position and convince yourself to hold on. The hardest thing to do is to admit things have changed and you are wrong.  Remember the “edge” that we enjoy in microcaps is one of information. Use the “edge” to buy and also to sell.  Keeping a pulse on the company while monitoring outside forces affecting the company are key in successful microcap investing. When things change, gauge the situation, but react quickly. It can mean the difference between a capital gain, and a large capital loss.

If you enjoyed this article, you will like Cutting Your Losses.