Thirty years ago a microcap was defined as a public company < $50 million market cap. Most investors today define microcap as <$300 million, and that is what we use here at MicroCapClub. I’ve seen fund managers such as Royce Funds define microcap as < $750 million. For those of us that exclusively invest in microcaps, we know there is a big difference between a $600 million market cap company and a $25 million market cap company.  The Russell MicroCap Index (IWC) in fact isn’t very micro. It’s more of a small cap index with an average market cap of $430 million, and holds quite a few companies with a $1 billion+ market cap.

I attended a smallcap conference this summer where I sat next to a well known smallcap fund manager. We were talking about what companies we liked and why. The dialogue that transpired is one I’ve had dozens of times, but it went something like this:

The fund manager started first and gave a few interesting names, most of which were $200-400 million market cap companies. I remarked jokingly, “Gary, I might as well just buy GE, what is the smallest piece of crap in your portfolio?”.  He laughs and says, “XYZ company, $124 million market cap is the smallest. We really can’t buy anything sub $100 million due to liquidity. Our average market cap in the portfolio is $300 million” I tell him, “I think if I added the market caps of all my holdings together it doesn’t equate to $124 million”. He says, “I wish we could invest in the really small microcaps, but we are just too big”.  This is a fairly typical conversation I have with most micro-smallcap money managers/fund managers.

These professionals aren’t dumb. They know the real area to make great returns is the super small microcaps, but they can’t because their funds are just too big. If you manage a $500 million fund, and you need to put 1% ($5 million) to work in a position, that is just impossible to do in a $30 million market cap that trades $50,000 worth of stock per day. However, the real value is found in these very small microcaps <$50 million. Let me give you a few statistics that prove this:

The smaller you go in microcap the more inefficient the markets become. Roughly half (49.4% to be exact) of all public companies on all US Exchanges + OTCBB + OTCM are microcaps defined by <$300 million market cap. A more staggering statistic is that 35% of all public companies are < $50 million market cap. These smaller microcaps, <$50m market cap, is where the greatest inefficiency lies. So not only are the cheapest stocks very small but there are a whole lot of them. This is why Warren Buffett and Peter Lynch first built their early wealth in this bastion of inefficiency before their assets grew so large they were forced up the food chain.

In 2005, Warren Buffett was asked the following question:

Question: According to a business week report published in 1999, you were quoted as saying: “It’s a huge structural advantage not to have a lot of money. I think I could make you 50% a year on $1 million. No, I know I could. I guarantee that.”…would you say the same thing today?”

Buffett Answer: “Yes, I would still say the same thing today. In fact, we are still earning those types of returns on some of our smaller investments. The best decade was the 1950s; I was earning 50% plus returns with small amounts of capital. I could do the same thing today with smaller amounts. It would perhaps even be easier to make that much money in today’s environment because information is easier to access. You have to turn over a lot of rocks to find those little anomalies. You have to find the companies that are off the map – way off the map.”

When you really dive into why there are more cheap companies in the <$50 million, a major reason is this is where illiquid stocks call home. There have been a few academic studies, such as the Ibbotson Study, which analyzed returns of liquid vs illiquid small-mid-large cap companies.  Ibbotson found that over a 37-year period liquid smallcaps returned just 5.9% annually compared to illiquid smallcaps, which returned a staggering 17.87% annual return over the same time frame.  I’m sure this is also a big reason why the fund with the smallest average market cap ($78m) rated by Morningstar, Perritt Ultra MicroCap (PREOX), is also the top performing microcap fund over the last year by Morningstar. 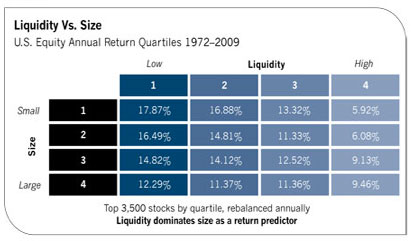 In 2013, it became cool again to say you invest in microcaps. This hasn’t been the case for a couple of decades. Historically, the only publicity mainstream financial outlets ever gave microcaps is to say how awful microcaps were. Of course, anyone with half an IQ just laughed because that thought process is what creates such ineffiency in the first place. Of course I’ve read several positive articles from these same sources recently. What a difference a year makes.

Ok, so I’ve basically got way off track since the first paragraph. To bring this back full circle, is microcap getting too big? Yes, I think the definition of what is microcap has gotten a bit out of hand. I cringe when I think of a $300-400-500 million company as microcap, and if I had a vote I would say a definition of <$100 million is about right. In the end I guess it doesn’t really matter, but it’s fun topic to debate.  I’m sure in another ten years <$1.5 billion will be considered microcap.

At MicroCapClub, most of our members make a living exclusively investing in microcap stocks. If you want to find out how we do what we do, check out some of our educational articles [HERE].