When I was in college a professor handed me a book that would change my path forever. The book was Think And Grow Rich by Napoleon Hill. I quickly read the book in two days, and then I read it again and again and again. The book was originally published during the Great Depression in 1937 and since then has sold over 100 million copies, making it one of the top selling books of all time.

The book originated when Napoleon Hill was doing research on what made successful people successful for an article he was writing. He had a chance to interview Andrew Carnegie, one of the richest and most powerful men in the world at the time. Carnegie was so impressed with Hill, that he gave him the task of interviewing and following closely the lives of other successful men and women. Hill’s compilation of research and interviews took 25 years. During those years he studied and interviewed over 500 of the most successful people in the world, mostly made available because of Carnegie’s influence. Hill would interview Henry Ford, Alexander Graham Bell, Elmer Gates, Thomas Edison, Luther Burbank, William Taft, John D. Rockefeller, and many others.

After Hill studied and interviewed all of these successful men and women, he noted their was a formula to success, and he published the formula in Think and Grow Rich. The book is a must read, not only once, but several times. 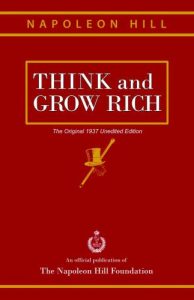