The difference between where you are and where you want to be is the pain you’re unwilling to endure. Microcap investing isn’t easy. If you aren’t prepared to lose money while the market educates you, then you will never learn and succeed. Unfortunately, investing’s greatest lessons can’t be taught in a book or in a classroom. They have to be experienced and often times the teacher is loss.

My early investing career was very painful. I learned by making and losing money over and over again. The road to success isn’t paved in gold. It is paved in blood, sweat, and tears. Losing money over and over wasn’t fun, but there was no way of getting around these painful lessons. An investor must experience the highs of success and lows of failure several times before they can exploit these emotions in others. Here is a chart of my maturation as an investor over the last 15 years: 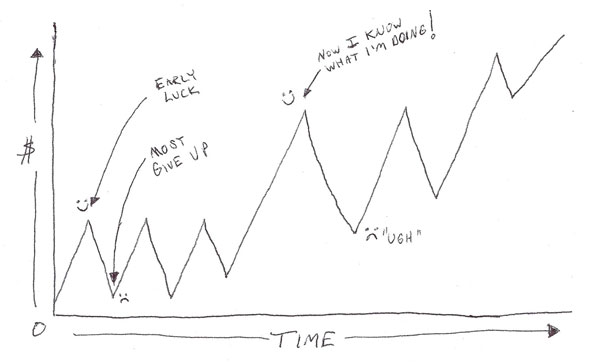 My first big winner (the first spike on the chart) was a 15- bagger and it was 95% luck. The bad part of early success is you think it’s skill. You get over confident and the market takes its money back. This is when most people just give up. Those that persevere will go through this a few more times each time learning something and forging an investment philosophy around their experiences. Eventually you start losing less money.

The reason why there aren’t many great investors is successful investing is difficult. It is the opposite of human nature. It is hard to discipline your mind in such a way. You are only as strong as you are honest. It’s human nature to blame others for your misfortunes in life and investing, but your best bet for a successful future is to fully own your past mistakes. If you blame others for your investment mistakes it is the same as admitting you didn’t do enough of your own work. But even more importantly when you blame others you won’t learn from your mistakes.

In 2010 my investment philosophy got a little sloppy and I made a series of bad investments and lost $600,000 over a 12-month period of time. In the months that followed I became very bitter and blamed everyone and everything but myself. It was easier to blame others than to look in the mirror. Investing is like golf; there is no one to blame for your score but yourself. I hit my own golf ball. I place my own trades. When I fully owned my losses, I learned from them, and slowly climbed back out of the hole. Rule #1: Fully Own Your Past Mistakes.

The key to building wealth isn’t just investing in great companies early, it’s also cutting your losses early. Warren Buffett’s famous quote “Rule No.1: Never lose money. Rule No.2: Never forget rule No.1.” I think many read that quote and think, “Well duh, of course I don’t want to lose money. Thanks for that brilliant advice.” It is a simple concept, but I want to take it a step further. To illustrate, if you’re down 50% in Year 1, you need to be up 100% in year 2 just to be back to break-even. You need to stay away from big losses because it takes a long time to bounce back from them. If you take a big loss one year it could take you a few years to get back to break-even. Those are precious years that you could be building capital instead of just getting back to break-even. Perhaps you could have retired five years sooner or became a full time investor years earlier. Big mistakes not only cost you financially but also cost you time. Time is one thing we can’t get back. Andrew Stanton says “Be wrong as fast as you can”. We investors are going to be wrong, and we are going to lose money from time to time. The key is Rule #2: Take Your Losses Quickly.


It is human nature that pushes us to sell our winners and hold onto and/or buy more of our losers. Investors normally have an anchoring bias towards their cost basis. If you own two stocks both of which you have an initial cost basis of $1 per share and one now trades at $1.25 and the other at $0.75 human nature pushes you to sell the winner to buy more of the loser. Something in all of us says, “I want to average down on my losers so I can break even quicker”. In most cases you should be doing the opposite, selling your losers and buying more of your winners. Rule #3: Work on Eliminating Anchoring Biases.

Cutting your losses quickly can be hard especially if you are a concentrated investor. It’s why I’m a big proponent of scaling into a position. I want to buy more as management and the business prove themselves. I love averaging up. I’m a concentrated investor and invest in a total of 5-7 companies. I am not perfect and don’t expect perfection. I fully expect one, two, even three of my positions to be losers. I just don’t know which ones. Living in this reality lets me work in a state of “Productive Paranoia” (read Great By Choice). The more concentrated and larger your investments in illiquid companies the more important it is to know your positions better than most. Spend twice as much time knowing what you own versus new ideas. What you don’t own can’t hurt you. As soon as I see cracks forming in the façade of my investment thesis, I start to sell. I cannot afford to wait until it is obvious to the masses. Limiting losses is just as important as fully realizing gains. Rule #4: Know Your Positions Better Than Most.

Taking big losses is not only detrimental to your wealth but also to your psyche and confidence. After a big loss your confidence is shattered which slows your thinking and leaves you second-guessing your decisions. When you are Waiting For Your Pitch, you need to be able to make disciplined and timely decisions. In bear markets, pitches can look like softballs (more ideas and less competition for ideas) giving you ample time to swing. In bull markets you get less pitches and the ones that are thrown look like 102 mph fastballs. You have much less time to swing the bat. You can’t be second-guessing yourself and your abilities. Rule #5: Don’t Lose Your Confidence.


“Analysis of over 25,000 men and women who had experienced failure disclosed the fact that lack of decision was near the head of the list of the thiry-one major causes of failure. Procrastination, the opposite of decision, is a common enemy which practically every man must conquer.”
Napoleon Hill

Don’t be too hard on yourself after your losses or you might be tempted to give yourself too much credit after your winners. You must control your ego while also not giving into your fear of failure. When you are sitting on a loser and you keep averaging down it’s your ego that says “I have to be right, keep buying”, but the scoreboard says you are wrong. When I get in this mindset I need to remind myself that being broke and right is the same thing as being wrong. Investing is hard and no one is perfect. Fully own your mistakes so you can learn from them. When you know your positions better than most you’ll know when to sell. Take your losses quickly when they are still small and you will be amazed at how quickly you can compound your capital.