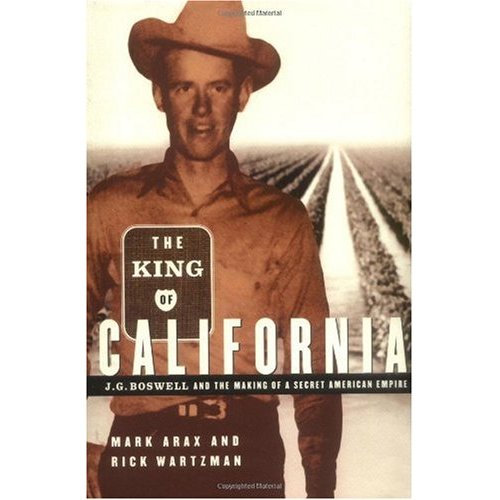 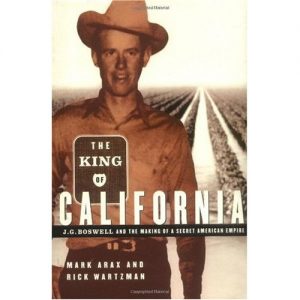 JG Boswell Company (BWEL.PK) is perhaps the most interesting micro cap company you never heard of.  This $700 per share, $650m market cap, non-reporting pink sheet company is the largest cotton farmer in America and known as the worlds largest privately owned farm.  The farming operation consists of ~150,000 acres (550km2) in Kings and Kern Counties just north of Los Angeles.  Most of this acreage rests on top of the dry Tulare Lake bed.  The company is known for its cotton production, but it is also the nations second largest processing tomato grower and packer.  The company is profitable and pays a dividend, not that you would know unless you know one of the less then 300 shareholders.

The company’s past reads like a novel, literally.  A book entitled, The King of California: J.G. Boswell and the Making of a Secret American Empire, was written about its founder.  The company was started in 1921 by J.G. Boswell, and later run by J.G. Boswell II who is credited for the company’s growth from 1952-1984 (died 2009). The JG Boswell Company is a semi-private company that doesn’t post public financials.   Legally, the company doesn’t need to because it has less than 300 shareholders.  You will not find much public information on the company besides local articles or industry articles written about the founder.  No company website, no press releases, no public financials.  In spite of this or because of this lack of transparency, the company has a cult following of sorts.

The only way you can even get a glimpse of what the company does financially is to become a shareholder, and I’ve heard that even the audited financials are not very detailed or descriptive.  The company earned roughly $31 per share last year, continues to pay a dividend (2% yield), so I can’t say the company is cheap per se.  This said I view BWEL as a land play/water rights play. Underneath the dry lake bed where BWEL grows its crops is an aquifer that could supply up to 3 million residents. The speculation around the company is that the water rights alone are worth several billion dollars on top of the land holdings and crop earnings.

BWEL has less than 1 million shares outstanding, which make the stock very illiquid (Average Daily Volume: 200 shares per day).   Surprisingly, the stock does have some institutional ownership.  As a full time micro-small cap investor, BWEL doesn’t exactly fit the normal growth profile I look for, but it’s such an interesting company I’m almost forced to pay attention to it.  The only way to pay attention to it is to own it.