A lot of investors have never heard of the tulip mania of the 1630’s. Tulip mania was a period in the Dutch Golden Age during which contract prices for bulbs of the recently introduced tulip reached extraordinarily high levels and then suddenly collapsed. By 1636 the tulip bulb became the fourth leading export product of the Netherlands—after gin, herring and cheese. The price of tulips skyrocketed because of speculation in tulip futures among people who never saw the bulbs.  At the peak of tulip mania, in February 1637, some single tulip bulbs sold for more than 10 times the annual income of a skilled craftsman. It is generally considered the first recorded speculative bubble. 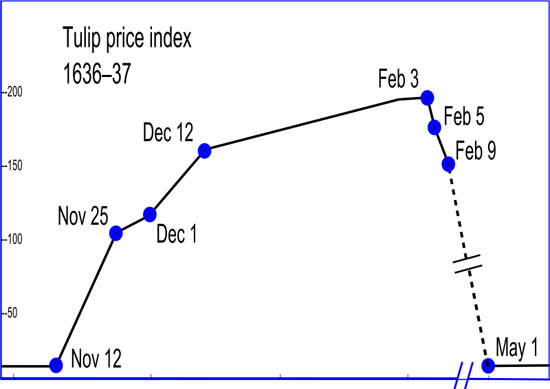 I know I’m not the only one that enjoys reading about the history of the markets.  After the crash in 1929, it took 25 years (1954 VIEW CHART) until new highs were made in the markets. I think it basically took that whole generation dying off or getting out of the business to psychologically allow the markets to move up. Over time confidence returned, and I’m sure tales of the great crash of 1929 became distant memory.  The price to earnings ratio of the S&P 500 moved from 7.2 to 22.2 between 1949–1961. By the early 1960’s the time was ripe for some “tulips”.

A broker friend of mine mailed me a hard copy of a chapter entitled “The Tulips of the Sixties” from the book I believe called “Psychological Aberrations of the Market Crowd” <- Although I can’t find this book anywhere.  The chapter is less then 20 pages long and well worth the read. It gives a great historical perspective into the speculative bubbles that occurred during the 1960’s including technology stocks, conglomerate stocks, bowling stocks, and others.  The full chapter can be viewed below. 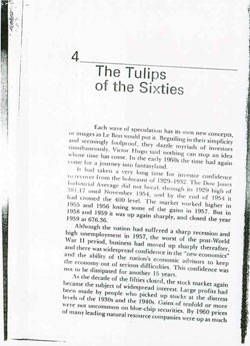