On February 1, 2009, Todd M. Cleveland became the CEO of a $5 million market cap microcap called Patrick Industries (PATK). In just seven years, he would transform the company through acquisitions and organic growth into a $61 per share, $940 million market cap, compounding machine. Since Todd Cleveland’s appointment to CEO, Patrick Industries has outperformed every other stock in North America. Shares have risen 16,000%, an astounding 106% CAGR. 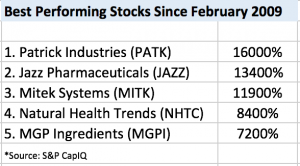 What does Patrick Industries do? Certainly it must be an exciting cutting edge technology or infrastructure company. No, quite the contrary. Similar to our intelligent fanatic 100-Bagger case study of Selim Bassoul of Middleby Corp (MIDD) that manufactured commercial kitchen equipment, Patrick Industries also operates in an unglamorous industry.

As mentioned in The Conviction To Hold, we all would like to think we would have had the conviction and foresight to invest in a company like Patrick Industries in 2009. A picture is worth a thousand words, and it would have taken a very special person to want to dive into the RV and MH industry during the crisis of 2008-2009:

Patrick Industries was founded in 1959 by Mervin D. Lung. The Company’s operations began as a distributor of paneling to the Elkhart, Indiana area’s manufactured housing industry. The company went public in 1968 and expanded by opening facilities in Kansas, Pennsylvania, Texas, North Carolina, and Florida. David Lung, Mervin’s son, becomes President in 1989, and would later become CEO in 2000. Some would say Mervin left at the top. As the chart showcased above, 1998 would prove to be a multi-year high point for the MH industry.

David Lung would resign in 2003, and Paul Hassler would become CEO in 2004. Hassler would put a three –year strategic plan in place to improve operational performance, while also looking at strategic acquisitions to diversify and expand the company. The company’s operating performance improved over these years.

“We spent the majority of the year intensely focused with a “heads down” approach to ensure that the integration of Adorn into Patrick was completed in a proficient and timely manner and according to an aggressive consolidation schedule. We worked diligently with the Adorn management team immediately following the acquisition to put together a detailed plan and timeline to successfully capitalize on the efficiencies and maximize the synergies that were identified in our due diligence process. We combined our efforts in all functional areas and our team members worked at an exhausting pace to guarantee that we met our identified objectives. Additionally, our senior management teams spent countless hours focused on the cultural integration of the two successful companies and their related management teams in what we consider to be a merger of equals, with both companies bringing its own set of strengths to the new organization.” –  Patrick Industries 2008 Letter to Shareholders

Paul Hassler’s strategic plan was starting to work, but then the financial crisis hit in 2008. Paul Hassler retired, and Todd Cleveland became CEO in February of 2009. Cleveland was thrown into the CEO role in the worst year in the company’s history. Unit shipment levels in the RV industry declined 55% in the first half of 2009, down 30% for FY 2009. The RV shipments track the consumer confidence index which was at an 18-year low. Unit shipments in the MH industry were down 39% for FY 2009. MH shipments were at 50 year lows.

Cleveland also focused on boosting morale and company culture: “We have intensified our focus on our “Customer First – Performance Based” culture which is anchored in exceeding our customers’ expectations and proactively adapting to their changing needs, and on developing and growing our talent and capabilities to meet those needs.”

The following year in 2010, Todd Cleveland continued to focus on cash flow and debt reduction. He sold two more non-core facilities and reduced debt by $69 million. He also instituted a branding campaign to highlight the entrepreneurial spirit within the company’s decentralized business units to drive accountability and an ownership mentality within Patrick. The company also entered a new $50 million credit facility with Wells Fargo which supported the long-term working capital needs of the company as well as strategic acquisitions.

Cleveland’s plan was to aggressively expand its RV market share through launching or acquiring quality product lines and line extensions, and the industry was primed for consolidation. He looked to acquire companies with solid management teams and strong customer and supplier relationships that had quality product lines primed for growth. In a very Berkshire Hathaway type of way, Patrick would give the acquired business and management team autonomy and allow their creative entrepreneurial spirit to continue to thrive while back stopping their capital, administrative and operational support needs. Patrick could then increase cross selling opportunities in its extensive product catalog, while increasing revenue per customer. 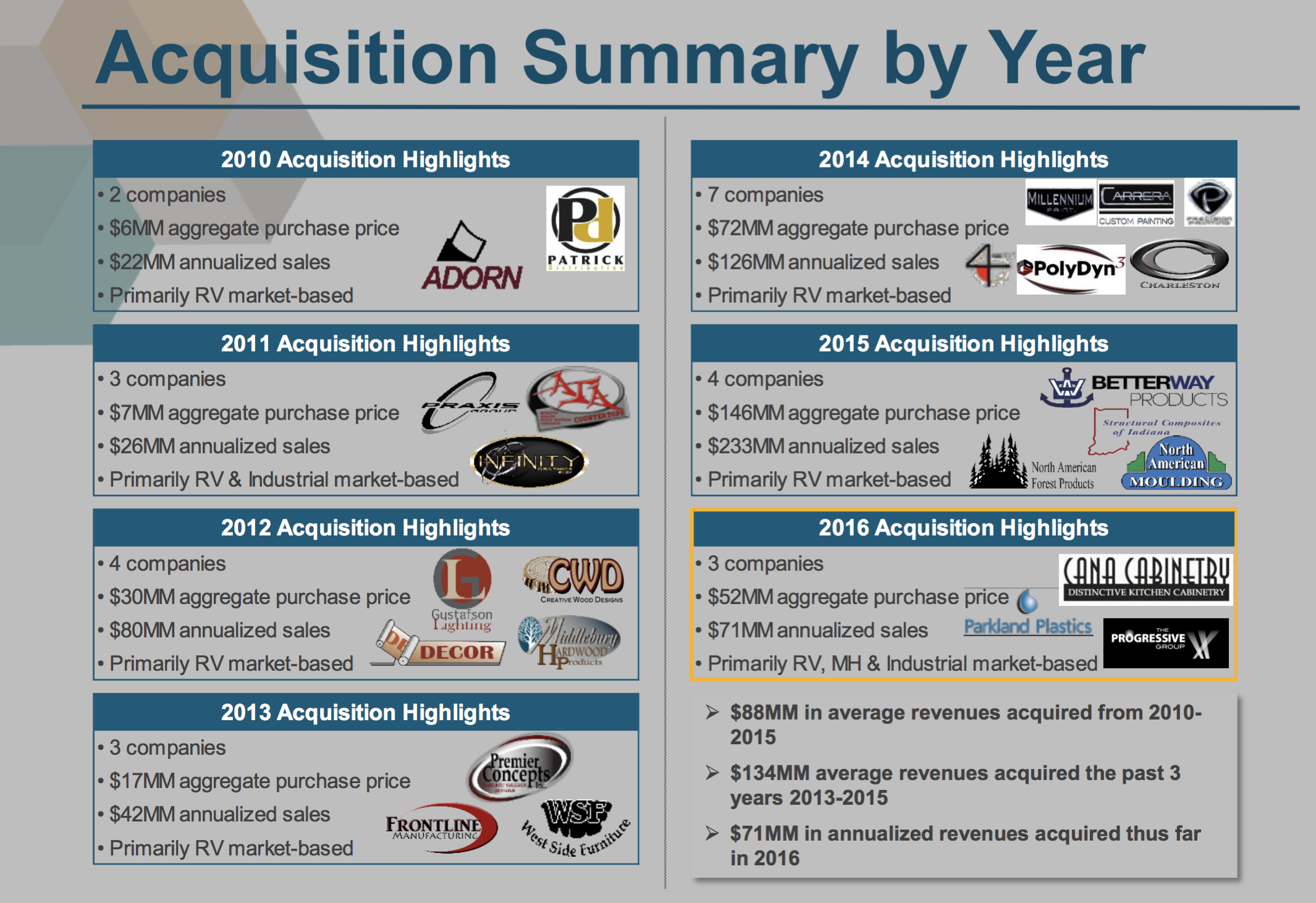 Todd Cleveland has proven to be very good capital allocator. Since 2010, his “Capital Allocation Strategy” invested $348 million in acquisitions, capital spending, and buy backs, while debt has only increased $168 million. A good portion of the capital allocation strategy is funded by strong operating cash flows due to low capex maintenance. The company expects to continue to utilize their leverage for strategic acquisitions.

Todd Cleveland is an intelligent fanatic and has done a tremendous job since becoming the CEO in 2009. He successfully rightsized the company during the great recession of 2008-09, and then skillfully executed his capital allocation strategy to grow the company. Patrick Industries has made 26 acquisitions since 2010 focusing mainly on the RV industry. Critics will say the company has succeeded because of several years of increased consumer confidence and low interest rates. This is true, but RV shipments still haven’t rebounded to 2006 levels when the company was a third its current size. The company will certainly be tested yet again when the US economy inevitably weakens, but you could say this about many intelligent fanatics that slowly built up compounding machines in cyclical industries. Sean Iddings and I showcase a few of them in our upcoming book: The Intelligent Fanatics Project.

All Great Companies Started As Small Companies. Perhaps the most exciting thing about Patrick Industries is it is still a relatively small company (< $1 billion market cap), and Todd Cleveland is still a relatively young intelligent fanatic (48 years old). It will be fun to watch this duo perform for years to come. Interesting to also note: While researching Patrick Industries and Todd Cleveland I quickly realized there was very little outside of public filings. No industry articles. No CEO interviews. I couldn’t even find a picture of Todd Cleveland, which makes him and the company even more alluring.

If you enjoyed reading this article, you will like these:

MicroCapClub is an exclusive forum for experienced microcap investors focused on microcap companies (sub $300m market cap) trading on United States, Canadian, and UK markets. MicroCapClub was created to be a platform for experienced microcap investors to share and discuss stock ideas. Investors can join our community by applying to become a member or subscribing to gain instant view only access. MicroCapClub’s mission is to foster the highest quality microcap investor Community, produce Educational content for investors, and promote better Leadership in the microcap arena. If you enjoy the search for the next great company,  Join Us.