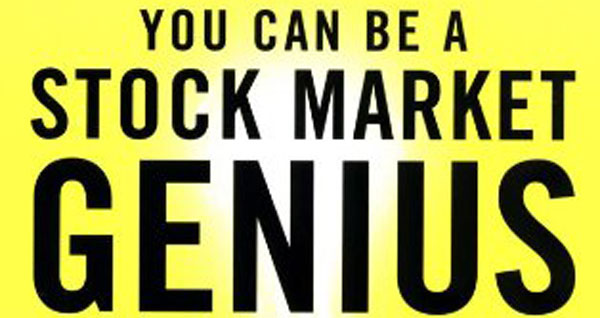 Originally published in 1997, “You Can Be A Stock Market Genius” remains popular today and is enthusiastically endorsed in a number of reviews on the internet.  The author, Joel Greenblatt, ran hedge fund Gotham Capital racking up a 50% average annual return over a 10 year period spanning the mid 80’s to the mid 90’s.  “You Can Be A Stock Market Genius” reveals how he did it and suggests that a motivated individual could do it too, even if he wasn’t all that smart.  Mr. Greenblatt has since acknowledged in subsequent books that these methods require more work than the average individual investor can muster.  His two subsequent books “The Little Book That Beats the Market” and “The Big Secret for the Small Investor” suggest stock screening methods that outperform the market without much effort from the individual.

I was enthralled with the book when I first read it in 1998 and have 14 years of experience since then implementing some of the strategies.  I’ll tell you my own experience later but first let me summarize the chief ideas in the book.  First, when a small individual investor goes up against professional portfolio managers, it’s no contest.  The professional portfolio manager doesn’t have a chance.  The intelligent and competent professional’s performance is strangled by the billions of dollars he has to invest.  Liquidity demands limit him to choosing among the largest and most followed stocks.  The individual, by contrast, has a universe of 10,000+ stocks to choose from including many smaller companies that are inefficiently priced.  Mr. Greenblatt points you in the book to the microcap space to look for mispriced securities.

He goes further than that, however, pointing you to specific situations where microcaps are especially likely to be undervalued.   In particular, there are certain situations where securities are dumped into the brokerage accounts of investors who didn’t buy them and don’t really want them.  This can result in indiscriminate selling and a temporarily depressed stock price.  A large company spinning off a smaller subsidiary to its stockholders is his favorite example.  The spinoff security just shows up in brokerage accounts all over the world at the same time.  Investors didn’t buy the security, they likely know little about the company, and in some cases may not even be allowed to own it.  A large-cap mutual fund, for example, may receive a microcap spinoff that their charter forbids them to own.  The value of the spinoff compared to the value of their investment in the parent may be small so they’re motivated to sell it without even investigating its fair value.  Company management doesn’t want to promote the new spinoff company until after their stock options are priced.  At the same time investors are selling indiscriminately, therefore, there’s also a dearth of information available for prospective buyers.

A second special situation is companies emerging from bankruptcy.  Many debts are reduced in bankruptcy and some of the debt is replaced by issuing new shares to the former creditors.  These new shareholders are in the business of loaning money and not owning equities so when the equity securities are issued to them they may want to sell perhaps indiscriminately.  A third special situation arises from company buy-outs.  In merger agreements, warrants or bonds or other securities are sometimes issued to sweeten an offer.  If you own shares in some large company that gets bought out, for example, you might receive $90 a share in cash and some 5-year warrants to buy additional shares of the acquiring company.  The tradeable warrants may be worth only a few dollars.  Many investors will just dump the relatively low-value warrants indiscriminately.  Mr. Greenblatt covers a number of other special situations including divestures and recapitilizations and discusses the use of options and LEAPS to provide leverage.

The book is full of specific examples of these situations from Mr. Greenblatt’s Gotham Capital days.  He includes his thinking that went into his decision to buy and later the decision to sell.  Mr. Greenblatt believes in personal motivation.  He likes to see generous option packages to incentivize the management team of a new spinoff, for example.  The very best situations arise when Wall Street doesn’t want the new security but the management or major owners do.  He cites specific examples involving spinoffs that Wall Street dumped but insiders (Malone and Hilton) wanted that became big winners.

The book is dated in one respect.  The method that Mr. Greenblatt suggest to find these special situations is to read a lot.  Articles in the Wall Street Journal or other publications pointed him to these situations while at Gotham Capital.  There are other ways today that are easier although reading a lot is still a good idea for any investor.  A search of SEC filings for form 10’s will bring up a list of recent and upcoming spinoffs for example.  There are free websites that maintain such a list as well.  Divestures can be found with a Google search.  I use the term “definitive agreement to sell” in the search and have results e-mailed to me daily.

I’ve had great success implementing two of Mr. Greenblatt’s methods.  A large company spinning off a micro-cap happens a few times a year and almost always results in an undervalued security.  Let it trade for at least two weeks before buying as prices nearly always fall initially.  Divestures often uncover a successful and undervalued remaining company just as Mr. Greenblatt explains in the book.  I’ve made a lot of money on these situations over the years.  Recapitalizations seem to be very rare these days, and I’ve never invested in such a situation.  I have come across an occasional merger security but never invested in one.  Mr. Greenblatt acknowledges in the book that the bankruptcy emergence situations didn’t seem to be as profitable as they once were.  The problem, he explains, is that hedge fund managers now buy up the debt before the company emerges from bankruptcy.  The issued equity doesn’t go to a bank but rather to a sophisticated hedge fund that knows what it’s worth.  I’ve invested in a few bankruptcy emergence situations with pretty mixed results.

I heartily recommend the book.  It’s both an interesting and humorous read while providing very valuable ideas and specific advice on what to look for in special situations.