Henry Ford, Thomas Edison, Harvey Firestone, and John Burroughs were all good friends. In fact, they were known as the Four Vagabonds. Between 1915 and 1924 the four would go on seven camping trips for weeks at a time. Edison would plan each trip and he wouldn’t tell the others where they were headed until they met at the start of each trip. Henry Ford would retrofit Model-T’s and other vehicles with kitchen equipment, cold boxes, food, so they could comfortably enjoy their solitude. They would often invite other people whom they respected, even US Presidents, to join them. They would spend countless hours traveling, talking, and enjoying each other’s company before disbanding. These camping trips would end in 1924 because they began to attract too much attention which defeated their purpose.

A friend of mine encouraged me to read these three books in the following order, and I would encourage you to do the same:

My Life and Work by Henry Ford is an exceptional look into the mind of one of the world’s greatest entrepreneurs. His impact on the transportation industry as well as other industries cannot be overstated. At the same time the automobile industry was ascending, so was the tire industry. Cars, trucks, tractors needed tires. Men and Rubber by Harvey Firestone is a look into the tire industry, and how he grew Firestone Tire and dominated the industry. Edison As I Know Him is Henry Ford’s tribute to his friend and mentor Thomas Edison.

Henry Ford worked for Edison until 1899 (chief engineer at Edison Illuminating Company), and credits Edison for being the only person that gave him early encouragement to push forward developing an automobile with an internal combustion engine. Here is a beautiful account by Henry Ford remembering his first encounter with Thomas Edison (source: Edison As I Know Him). 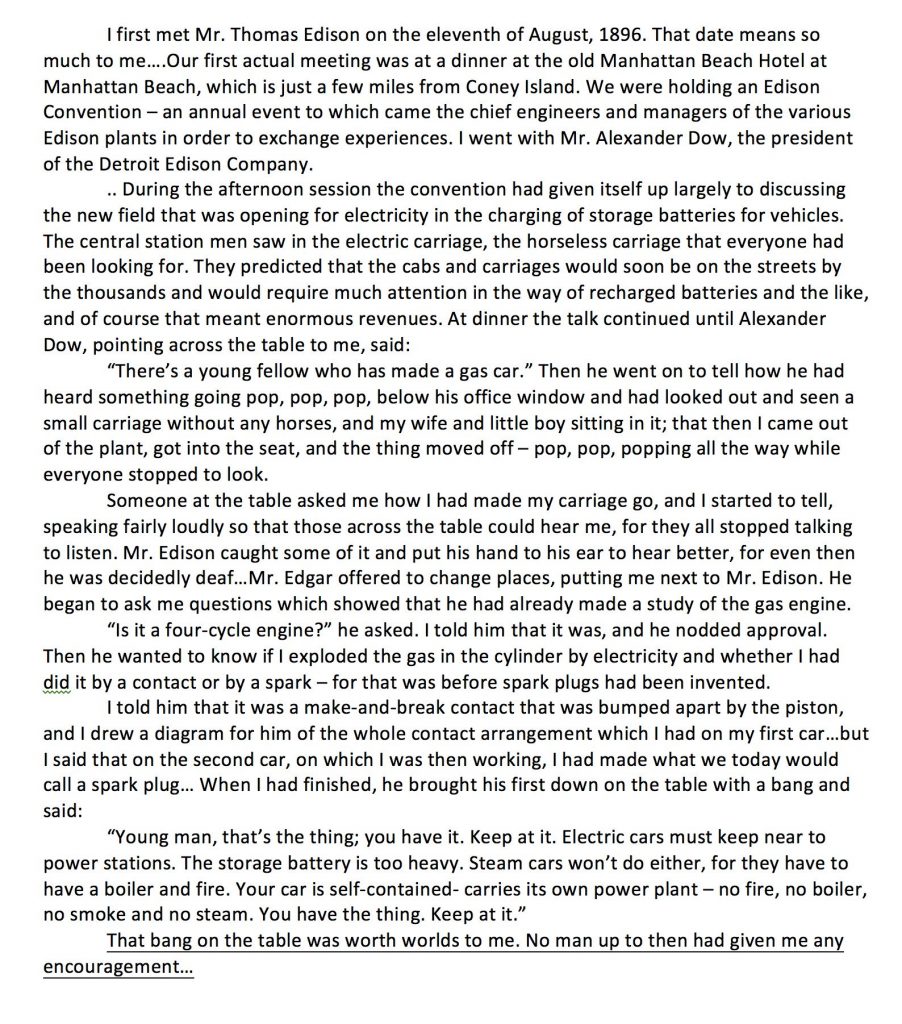 Harvey Firestone, founder of Firestone Tire and Rubber Company, credits Henry Ford for much of his company’s success. Henry Ford would give Harvey Firestone his first major contract for tires that would catapult the company into dominance. In 1902, Firestone Tire had $150,000 in sales and grew to $115 million by 1920. In the fantastic book, Men And Rubber, he tells the story of starting and growing Firestone Tire, and also devotes several chapters to the camping trips he had with Ford, Edison, Burroughs, and others.

You can understand why these men got a long so well because they had very similar business philosophies. They all believed in simplicity and driving down costs, even to the short-term detriment of their businesses. On a few occasions they would price the car (Henry Ford), light bulb (Edison), or tire (Firestone), lower than the cost of production to force the engineers to make changes to make it profitable at that lower price. When Edison invented the incandescent light bulb it cost his company $1.25 per bulb to manufacture. He sold them for $0.40 and took the loss because he knew that was the price it made economic sense for resellers and consumers. He took losses for four years before his cost to manufacture dropped to $0.22, and by that time millions were sold. His company was quickly bought out. He took short term pain for long term gain. Henry Ford said, “Our policy is to reduce the price, extend the operations, and improve the article. The reduction in price comes first…the low price makes everybody dig for profits”. 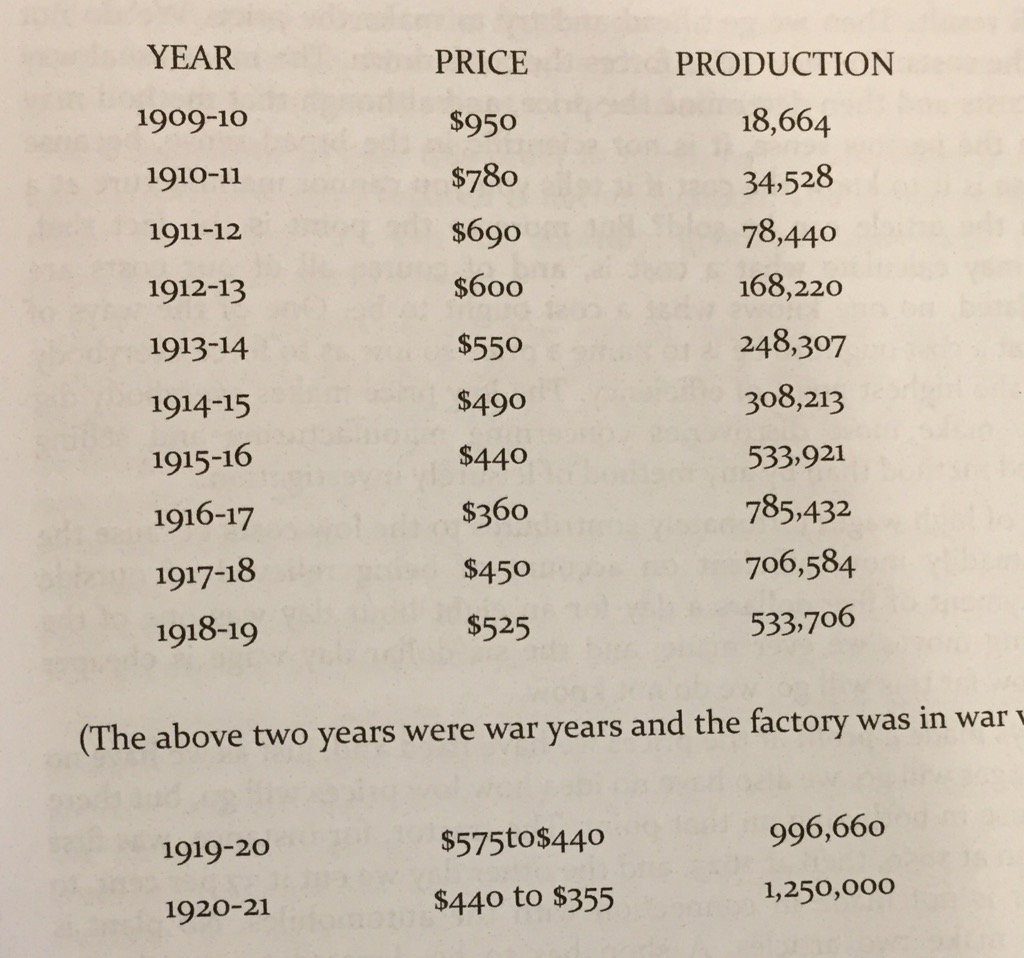 A testament to Henry Ford’s integrity and long-term values, “During one year our profits were so much larger than we expected them to be that we voluntarily returned fifty dollars to each purchaser of a car. We felt that unwittingly we had overcharged the purchaser by that much.”

All of these men revered each other. Henry Ford on Edison, “Nearly every important factor in our prosperity directly or indirectly traces back to some invention by him…I often think how pleasant an experience has befallen me, in that my boyhood’s hero became my later manhood’s friend. It is a circumstance that in the nature of things cannot occur very often.”

Harvey Firestone on Henry Ford and Thomas Edison, “And so this may be a final – and the only – record of our wanderings [Camping Trips], and I want to set down, partly in my own words and partly in the words of others, something about Thomas Edison and Henry Ford, for they certainly own the most outstanding sets of brains in the world today. I doubt if any two men ever contributed more to the public welfare than have they, although that may not be as generally appreciated as it ought to be…. I have always liked to be with big men – with men whose ideas extend beyond the little things near at hand and whose vision has no horizon.”

I have covered 1% of these books usefulness above, so I hope I have helped seduce you to read these three books for yourself. You might be wondering what these books have to do with microcap investing. These men were intelligent fanatics. To find great companies early, you need to understand how greatness thinks.

MicroCapClub is an exclusive forum for experienced microcap investors focused on microcap companies (sub $300m market cap) trading on United States, Canadian, and UK markets. MicroCapClub was created to be a platform for experienced microcap investors to share and discuss stock ideas. Investors can join our community by applying to become a member or subscribing to gain instant view only access. MicroCapClub’s mission is to foster the highest quality microcap investor Community, produce Educational content for investors, and promote better Leadership in the microcap arena. If you enjoy the search for the next great company, Join Us.