It’s fascinating to me how two value investors can look at the same company and have two completely different opinions. I was at a conference recently and ran into another full-time investor whom I always love engaging with because he is successful and has the complete opposite strategy as me. When I met him for the first time, I asked him what he looks for in an investment. He said he actually looks for really bad management teams. And I said, “To short?”, and he replied, “No no, to go long. I don’t short stocks”. He went on to describe his very diversified strategy (30+ companies) of betting on bad management teams. He generally looks for good businesses that are run by idiots. It sounds insane to me, but you know what, he’s been a full-time private investor for 10-years with an incredible track record.

Sanjay Bakshi and the CFA Society of India recently hosted Howard Marks in Mumbai where he gave a brilliant presentation entitled The Truth About Investing. You can view the video presentation and slides, and I also had it transcribed to make it easier to take notes. At 20:35 minute mark of the presentation he talks about second-level thinking and shows this slide: 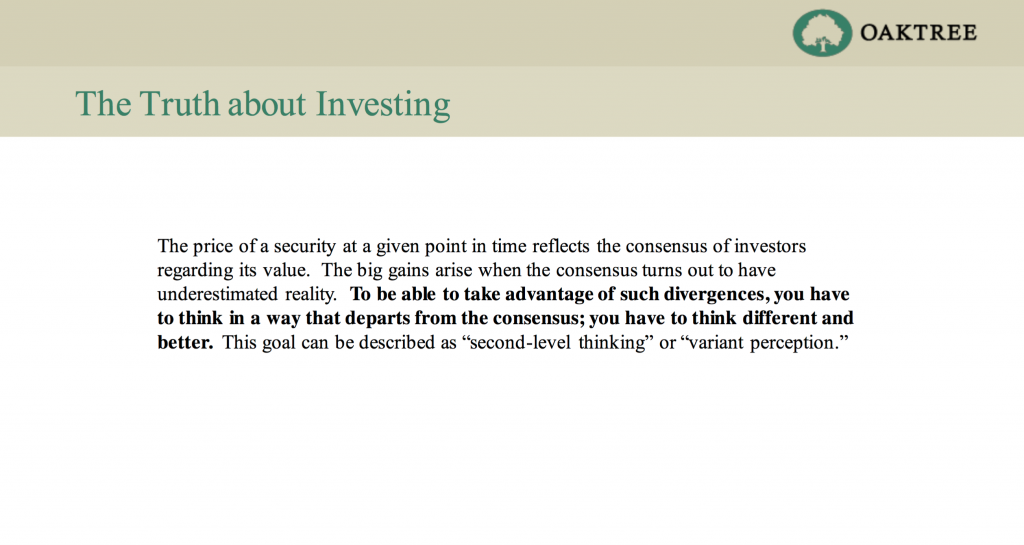 To paraphrase, if you think the same as everybody else, you’ll act the same. If you act the same as everybody else, you’ll perform the same. The key to outperformance is to think different and better. You have to do both.  Reid Hoffman said it perfectly [source], “It’s easy to be contrarian. It’s hard to be contrarian and right.” I believe a big part of successful investing is the development of second-level thinking within your own strategy. Farnam Street wrote a great piece on second-level thinking [here].

For me, I’m mainly looking for high quality businesses that can reinvest internally generated cash flows at high rates of return ie compounders. I want to find the small snowballs (microcaps) that are rolling downhill where eventually their size, velocity, and quality will attract institutions. Often times these companies are misunderstood when they are small. And sometimes they are misunderstood for their entire lives like Amazon.

Josh Tarasoff, General Partner of Greenlea Lane Capital Partners LP, has my vote for best interview of the year (H/T Chip Maloney), which you can read [here]. There are so many great nuggets in the relatively short interview, but I’m going to focus on his comments on compounders and thinking different. Here is a power packed paragraph:

“We [the financial industry] have these rules of thumb that say 15x is a middling multiple, 10x is getting cheap, single-digit is really cheap, 20x is not cheap, and over 20x is really expensive. We have these rules of thumb for a good reason which is, on average, they are right. The market as a whole is an average of all businesses. If all of the companies in the market are homogeneous with respect to their future earnings growth and returns on capital, then you can apply these rules of thumb to every single company. But, in realty, companies are so ridiculously different from one another. What I’m looking for is the outliers in the 99.9 percentile of great companies, and what is cheap for those companies is so far from these rules of thumb. I invested in Amazon in 2011, and it was trading at 200x P/E, but actually the multiple of what I thought was normalized sustainable free cash flow is in the 30-40x range. And I thought that was cheap! That’s very different from what most value investors do. This might not be accepted by many people. I’ve had phone calls with prospective investors where I actually would explain the Amazon thesis and I would say “I think it was at 30-40x free cash flow when we bought it”, and the other guy was like “13-14?”. And then I said “no, no, 30-40”. And then it’d be a weird pause, and I knew that the conversation was over. There’s a lesson in that we are getting back to one of the things I said about the advantage of not telling your investment strategy to something that you can sell to other people. I think that most people, whether they admit or not, or whether they know it consciously or not, are making compromises on what they do to make what they do salable. Whenever you do that, you’re trying to appeal to the lowest common denominator to the prospective investors, and by definition, you’re becoming a consensus investor. You can’t do that and expect to have good results. I think that there’s almost literally a direct conflict between salable as an investor and being good as an investor. That’s what it is.”

“..the most exceptional compounders are by definition doing something idiosyncratic and weird, and people are fundamentally not super comfortable with that; …they usually look statistically not cheap.”

A couple years ago, I started a thread on our MicroCapClub forum [members-subscribers can view here] talking about idea generation and stock screening. Given my strategy, I’ve always felt stock screening to be rather useless in finding new ideas. I’ve found public/private forums, reading press releases and filings, word of mouth and even serendipity to be better idea generators. Everyone does screens nowadays and is looking at the same results. It’s very first-level thinking. But one of our members had a brilliant response which I’ve applied since.

“You generally won’t find misunderstood business with revs growing double digits, no debt, +20% roic’s, insider purchases, etc.; and a misunderstood business is the one I want to own. One thing that screeners are good for is screening for those excellent traits I mentioned earlier and then going to the first 10 years of financial statements of that company and seeing where the growing pains were, when it was misunderstood, and when one should have gotten involved… I’d even rather screen for undesirable traits and find the needle in the haystack than look at the same list as so many others (filtering for good traits).”

History has taught us that great investors come from every niche of investing. The key to outperformance is to think different and better. First level thinking only tells you what the consensus already knows. You weren’t meant to be average, so stop thinking like everyone else. Don’t rely only on traditional thinking and traditional metrics. This doesn’t mean to rush out and buy a bunch of expensive stocks. It means to dig deeper. Think deeper. Question everything. You can learn a lot about greatness when you analyze it when it was misunderstood.