In 1948, Ben Graham through his company Graham-Newman Corporation bought 50% of GEICO for $712,000. By 1972, this investment was worth $400 million, a 562 bagger. The gain in GEICO would contribute more profit to Graham’s partnership than all the gains from all other investments combined. The irony is that Graham rarely invested more than 5% of the firm’s capital in one company, but with GEICO he invested 20% of the firms capital. Graham’s most successful investment ever came when he broke his rules and made an educated concentrated bet.

Warren Buffett, age 20, was introduced to GEICO in 1950 when he was Graham’s student at Columbia Business School. Buffett would soon travel to GEICO head quarters to conduct due diligence on the company. He would talk for hours with Lorimer Davidson (would later become CEO) and gain valuable insight into the business. Less than two days after the meeting with Davidson, Buffett would put 75% of his net worth into GEICO. About two years later he would sell GEICO for a 50% gain. [side note: Buffett would later join GEICO’s board of directors even though he didn’t own the stock. This would change in the 1970’s when he would start buying shares, adding through two decades, and finally in 1995 buying the remaining 49% of GEICO he didn’t own for $2.3 billion.]

Throughout his early 20’s, Buffett would continue allocating capital to only his highest conviction investments. In some cases this meant placing big bets on one, two, or three companies in particular. When reading Warren Buffett’s comments during this time period, he often used phrases like, “I bought as much as I could”. You don’t hear him using phrases like, “I was worried about owning too much”. From 1949 to 1954, he would average ~50% annual returns, growing his capital 10x breaking the $100,000 mark, equivalent to $1 million today.

“If I was running $1 million today, or $10 million for that matter, I’d be fully invested. Anyone who says that size does not hurt investment performance is selling. The highest rates of return I’ve ever achieved were in the 1950s. I killed the Dow. You ought to see the numbers. But I was investing peanuts then. It’s a huge structural advantage not to have a lot of money. I think I could make you 50% a year on $1 million. No, I know I could. I guarantee that.”– Warren Buffett

I talk to a lot of highly intelligent investors and some are just getting started with $2,000 – $5,000 – $20,000. The road to $1 million might seem impossible like it’s ascending straight up Mt. Everest. It is not. All you need to do is find and buy a couple great companies early and you will get there. I think fellow MicroCapClub Member Tom Klein said it best when he tweeted:

Now we aren’t going to start comparing ourselves to Warren Buffett, but what we can do is analyze how he grew his initial capital from $10,000 to $100,000 in his early twenties. Even Buffett didn’t have it all figured out when he was getting started, and his investment philosophy would evolve over time. When I was managing $25,000 my approach wasn’t nearly as disciplined as it is now. Now unlike Warren I was human and took a few big losses during my early capital building years. Most people reading this will also experience your fair share of loss along the way. It will test your psyche, emotions, and discipline, but there is no greater educator than loss. You will learn by losing and then you will prosper.

Warren Buffett’s greatest asset was (and is) his ability to focus. In his early years he wanted to grow his capital as quickly as possible. He didn’t do that by investing in ten good companies. He did it by finding one, two, three great opportunities and buying as much as he could. He didn’t have position sizing rules. The more he liked something, the more he owned. Even Graham broke his own rules and bellied up to the bar when he saw a great opportunity in GEICO. When I was building my capital base from $10,000 to $100,000 to $500,000 I was at most in three positions. I found the best investments I could find and bought as much as I could. If you want to build capital quickly, only invest in your best ideas. Life is Too Short To Diversify.

Now I’d like to add a couple more important things ……

If you want to grow your capital quickly you need to find companies that can be multi-baggers. You need to find stocks that can get big. Most investors assume this means taking on more risk. This isn’t the case at all; in fact I would say this is less risky then most value investing strategies. It is just harder to find such companies. You want to find and buy undervalued companies that will get very overvalued. Through the years I’ve found when you find these elements in one stock, it’s a good formula for success: 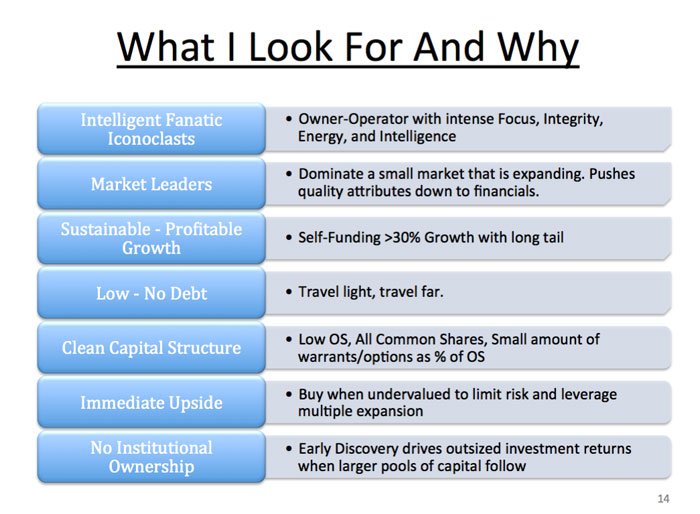 From Presentation: All Great Companies Started As Small Companies

Extraordinary returns follow extraordinary discipline. Discipline in buying and selling, and maybe the most important one of all, Holding. Don’t bother finding the next multi-bagger if you aren’t going to develop the conviction to hold it. Ben Graham didn’t achieve a 500+ bagger in GEICO because he bought his position in 1948. He achieved a 500+ bagger because he held his position. When you find great companies, develop The Conviction to Hold.

There is no reason you can’t turn $10,000 into $1 million in ten years or less regardless of the macro economy. Learn from Warren Buffett and from others on how they turned small amounts of capital into wealth. Don’t listen to those that have never done it. Never seek advice from people that haven’t done what you are about to do. To do great things you can’t think like everyone else. The first million is a bitch, but you will get there.

You might also find this interesting: Warren Buffett’s Net Worth By Age