Investing is hard. Microcap investing is even harder. Turning a small sum into your first million rarely happens in the time frames we want. No Pain No Gain. Symbolically, we would all like our stock and portfolio returns to look like this: 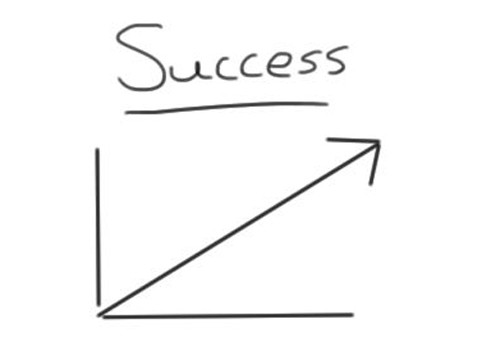 Unfortunately, the markets do not work this way. Nor do businesses. But you may say, “Sean, there are overnight success stories found in the news, like the break out investor who has been leaving the market and competitors in the dust or the private tech company that is receiving another round of funding pushing their valuation up another billion dollars.” Sure, but what we hear in the news is the tip of the iceberg. Individuals are lucky because they were prepared and most people do not want to prepare by experimenting and learning from mistakes.

Steve Jobs and a myriad of other successful individuals, past and present, have come to the same conclusion; success is a combination of luck, hard work, determination, smarts, and appetite for risk. There is no such thing as an overnight success. It usually takes years for a company to become successful and it can take years for an investment to bear fruit. Mark Twain might have said it best:


“Overnight success is a fallacy. It is preceded by a great deal of preparation. Ask any successful person how they came to this point in their lives, and they will have a story to tell.”
Mark Twain

The problem is that we hear next to nothing of the challenges, hard work, and dedication necessary to achieve success. Like Mark Twain said, successful individuals have a story to tell and I think not hearing these journeys toward success is a big mistake for the microcap investor.


I’ll pick on Steve Jobs for a moment. He introduced the iPod 25 years after he co-founded Apple, at which time Apple really started hitting its stride. It is easy to forget the years of mistakes Steve Jobs had endured to get to that point. The Apple III was a flop with only 65,000-75,000 units sold. His pet project the Apple Lisa and the G4 cube were blunders and, not to mention, Jobs had been kicked out 9 years after co-founding the business. Steve Jobs essentially was never afraid of failing. He talked about his mindset in this clip:

Jobs also had to encounter a number of challenges as an investor. His $10 million investment in Pixar was a dud for the first 9 years. He sunk an estimated $50 million more into the company and was close to giving up many times along the way. Eventually Pixar took off with the release of Toy Story and had an IPO in 1995. Jobs’ 80% stake in Pixar was then valued at $1.1 billion. In 2006, Disney acquired Pixar for $7.4 billion leaving Steve Jobs with 138 million shares of Disney for a $4.5 billion valuation. That was roughly a 23% compounded annual return over 21 years. Pixar was actually the investment that made Steve Jobs a billionaire, not Apple. Steve Jobs stuck to his higher calling in the face of countless challenges and failures. Each of his challenges set him up to be better prepared for opportunities that came about in the future for Apple.

As Ian has mentioned, I am working with him on The Intelligent Fanatics Project and Herb Kelleher is one of our case studies. Herb Kelleher co-founded Southwest Airlines in 1971 and led the company for many decades. The company reached profitability in 1973 and has been profitable every year since. Yes, this track record flies in the face of the worst industry capitalism has ever seen; the airline industry. Warren Buffett even got burned on airlines after losing $350 million buying debt in USAir in 1989. Buffett says, “Investors have poured their money into airlines and airline manufacturers for 100 years with terrible results.” This isn’t exactly true. Investors made a fortune betting on Herb Kelleher of Southwest Airlines. $10,000 invested in the IPO would have compounded at 19.3% for 43 years and resulting in $17,722,914 today (170,000% return).

Most people do not know that Herb Kelleher and Southwest had to endure significant challenges before the company ever flew its first flight. Competitors Braniff International Airways and Texas International operated in a regulated monopoly and did not want another competitor to enter into the market. From 1967 to 1971, the incumbents filed temporary restraining orders and other legal devices to thwart Southwest from ever flying. Herb Kelleher, acting as Southwest’s lawyer, fought against these established competitors and finally succeeded, nearly going bankrupt in the process. All of the initial challenges imbued a warrior spirit within Kelleher and within Southwest Airlines’ culture. This warrior spirit prepared the company for the many challenges they would later face.

So, success is not a line straight up and to the right. Success looks more like this: 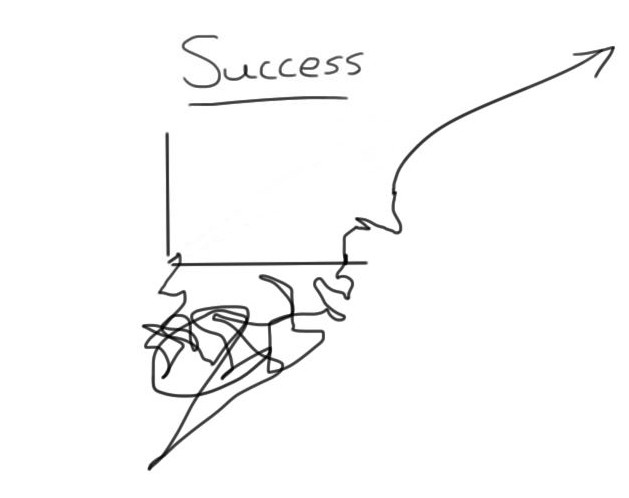 All great companies started as small companies. Apple and Southwest started as microcap companies and endured numerous challenges before they were successful. This is an important observation for investors to remember when evaluating microcap management teams. A microcap CEO might have made numerous mistakes in the past, but if they learned their lessons it can be a powerful springboard toward success. You can think of mistakes as lessons. Writing off someone who has experienced a number of valuable lessons is a mistake. A rare number of leaders will learn from their mistakes and are likely to be better prepared for future opportunities.

Chip Maloney provides great insight on the art of interviewing management teams and my added suggestion would be to follow Warren Buffett’s advice, “Is management candid with shareholders?”. My process includes specifically asking management what mistakes they’ve made in the past. Humble managers will candidly describe one or more past failures as well as what they learned. These are the leaders who are preparing themselves for future success.

If you look at the data, intelligent fanatics are often late bloomers. Ian posted the following on Twitter:

That idea you've been thinking about. That dream you have. It’s time to move things forward and reach your destiny. pic.twitter.com/Qgu8aD3kCD

These leaders had to experience life and many challenges to be prepared for their later success. It is inspiring to think that Sam Walton at age 44 opened his first Wal-Mart and during his lifetime dominated the industry.

The same is true with the individuals found in The Intelligent Fanatics Project. Every single one of our case studies, 10 in all, started as small companies and their leaders had at least one large mistake or challenge that they had to overcome. Many had multiple mistakes or challenges early on or in previous ventures. This means it took years before the CEO’s started the businesses that led to their ultimate success. The average age of the CEO’s in The Intelligent Fanatics Project is 35 years old, many starting in their late 30’s. Keep in mind that some intelligent fanatics, especially the youngest, experienced failure early in their business and needed to continuously learn and adapt to be successful. Below is a list of the ages of each case study: 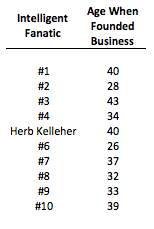 Another important factor for companies to succeed in the long-term is for the microcap CEO to constantly adapt. Consumer preferences change, so CEO’s need to be a step ahead of those changes. And the only way for managers to stay ahead of market changes is to experiment. A by-product of trial and error is of course error, so managers need to embrace small failures. On the other hand, fear of making mistakes leads to complacency and allows smaller companies, who do not fear adapting, to innovate and siphon profits of larger companies. Large corporations, their professional CEOs, and their corporate bureaucracies despise failing and will shy away from adapting to change. Lean towards investing in founders or those who have a founder mentality and an experimental mindset to adaptation.

As investors we too are going to make mistakes and lose money. Your investment strategy is molded and shaped through these experiences. Not all your investments will work out in your anticipated time frame. Success often takes longer than we think. Learn from your mistakes and keep focusing on the long-term. The lessons you learn from your investment mistakes will stick with you forever and prepare you to handle the great opportunities that are around the corner.

I’ll leave on this quote from Scott Adams, the creator of Dilbert:

“Failure is where success likes to hide in plain sight. Everything you want out of life is in that huge, bubbling vat of failure. The trick is to get the good stuff out.”