If a competitor had unlimited resources, how quickly could they duplicate the company’s competitive advantage? This is a simple question that I ask myself and management when I try to measure the moat of a microcap company. Microcap companies are small companies and often times vulnerable to larger competitors with more resources. Paraphrased, even further, How Can I Hurt You?, is very powerful.

In The Vision To See Economic Moats, Chip Maloney illustrates this perfectly:

“The majority of small companies have little to no economic moat around them.  In these cases it is pretty easy for upstart competitors to start competing against these companies as there are often few barriers to enter the industry which allows them to steal market share from incumbents. These companies are often situated in industries that are so competitive that it is often impossible to determine what the future holds because industry economics can change rapidly.  Developing a vision for these companies’ futures will often prove highly inaccurate.

A much smaller percentage of small companies possess one or more of the economic moats discussed above which prevents new and existing competitors from attacking their businesses.  With these companies, you can develop a vision of the future with much more certainty of accuracy because you can see beyond the near term that their economic moat will be enduring. This should allow them to continue to generate good returns on invested capital due to the protections offered by the economic moat.”

A simple way to find a microcap company with a moat is finding one that dominates their market (ie: geography, product-service category, etc). For a microcap company to be a market leader, its market is likely small. An important benefit of focusing on these niche market leaders is it proves management is competent which is always a big question when investing in microcap companies. The management either created the market or they took market share away from competitors. These companies also tend to showcase above average financial performance. They are almost always profitable. There is no sense dominating a small market just to lose money.

Finding a microcap company that dominates its market is difficult, but there are many small markets that are stagnant or even declining. For example, I remember listening to Nate Tobik (@oddballstocks) give an excellent presentation on investing in market leaders in stagnant or declining niche markets. I believe he gave an example of a company that still produces VHS video cassettes that has well over 50% market share. The business had really good market leading business fundamentals, but their stagnant market was forcing them to stay small. [Quick Note: In the book, Small Giants, author Bo Burlingham tells the stories of several small companies that had fantastic growth prospects but chose to stay small].

For my investment strategy, I like to be even pickier and focus on finding microcap companies that dominate a small market that is expanding. A market where many more customers will want to purchase the product or service in the future. These rare gems are hard to find, and even harder to find at a fair valuation. We have found several on MicroCapClub.

My intrigue with these niche market leaders runs deeper than the business itself. It’s the fact that management had the foresight several years before, or even a decade or more prior to create a sustaining business and moat around an area that few others saw. The person you will find running these types of businesses are often times Intelligent Fanatics.

Intelligent fanatics are not competitor focused, but customer driven. The ethos of their companies is set up around an established set of enduring customer driven principles. Then, they fanatically execute on these principles using traditional and unconventional means (innovation). Jeff Bezos, appropriately discusses this concept:

“I very frequently get the question: ‘What’s going to change in the next 10 years?’ And that is a very interesting question; it’s a very common one. I almost never get the question: ‘What’s not going to change in the next 10 years?’ And I submit to you that that second question is actually the more important of the two — because you can build a business strategy around the things that are stable in time. … [I]n our retail business, we know that customers want low prices, and I know that’s going to be true 10 years from now. They want fast delivery; they want vast selection. It’s impossible to imagine a future 10 years from now where a customer comes up and says, ‘Jeff I love Amazon; I just wish the prices were a little higher,’ [or] ‘I love Amazon; I just wish you’d deliver a little more slowly.’ Impossible. And so the effort we put into those things, spinning those things up, we know the energy we put into it today will still be paying off dividends for our customers 10 years from now. When you have something that you know is true, even over the long term, you can afford to put a lot of energy into it.”

To create a growing sustainable business, you have to have the ability to create a moat that will defend the company from attacks. Famous value investor and author Phil Fisher once said that the most important question to ask management is: “What are you doing that your competitors aren’t doing yet?” or [in my words] “What is your competitive advantage?”. I would argue the best question to ask next is “How could I hurt this business?”.

It’s human nature to be drawn to the underdog. The microcap space is filled with David versus Goliath stories. Naysayers will say David was lucky against Goliath. But David was practicing with his sling for years. David knew which stones would be the most accurate. He knew where to hit his larger complacent adversary. He was faster, nimbler, and maybe the most important, he had nothing to lose so he had the courage to step forward and attack. Every day smaller companies topple giants and/or are attacked by larger companies but prevail.

As a microcap investor, I love the stories of perseverance:

On MicroCapClub we have been following a company that created its niche, is the market leader, and has profitably grown revenues fairly consistently at a 30% CAGR the last several years. This small microcap company has a competitor that just so happens to be a $100 billion market cap company, albeit the product itself is very small to the larger company (1 of 1000 products it sells). Over the last few years the smaller company develops and grows the market for the product and the larger company rides along. Finally, you can almost picture some middle layer manager at the $100 billion company raise his hand and say “I think we need to look at this small product category as it’s gone from being a .001 rounding error to a .01 error (sarcasm). Now it’s becoming material. How do we hurt this small company and push them out of the way?” The large company tries to hurt the smaller company by filing a lawsuit citing some patent infringement claims. Investors in the small company are fearful this could affect the business and the stock drops 50%. This lawsuit is still going on today, but a funny thing happened. The company continues to grow like nothing happened. The company’s customers don’t care about the lawsuit because they love the company’s products and customer service. You can picture the $100 Billion market cap company thinking, “Well…now how are we going to hurt them?”.

There is another company on MicroCapClub we’ve been following for years. A husband-wife management team who started the company 20 years ago. They had a vision for where the industry was headed. They laboriously built the company and now dominate their niche market. They have acquired or competed away most of the competition in their current addressable market which is expanding. A few years ago, on a conference call the CEO said, “It’s not build it and they will come, it is build it because they are coming”. They have spent such a long time developing their product offerings, services, and moat that it would be very hard for a competitor to hurt them. It would take a lot more than money. It would take time, roughly five years to even make a dent in their competitive advantage. So how can I hurt them?

An area that has always fascinated me are larger well-known companies that continue to dominate their markets and industries. Companies like Costco, Chick-fil-A, or Wegmans. In these instances, their competitive advantage and strategy have been known for years, even decades by the competition. You can find numerous case studies on them. These companies don’t necessarily even have anything proprietary, except….perhaps the most powerful moat builder of them all. Culture. You know your culture is an asset when the competition knows what you are doing, how you are doing it, and they still can’t duplicate it. It’s equivalent to knowing that the pitcher is going to throw you a fastball. You know it. He knows, and he knows that you know it. And you still can’t hit the pitch. 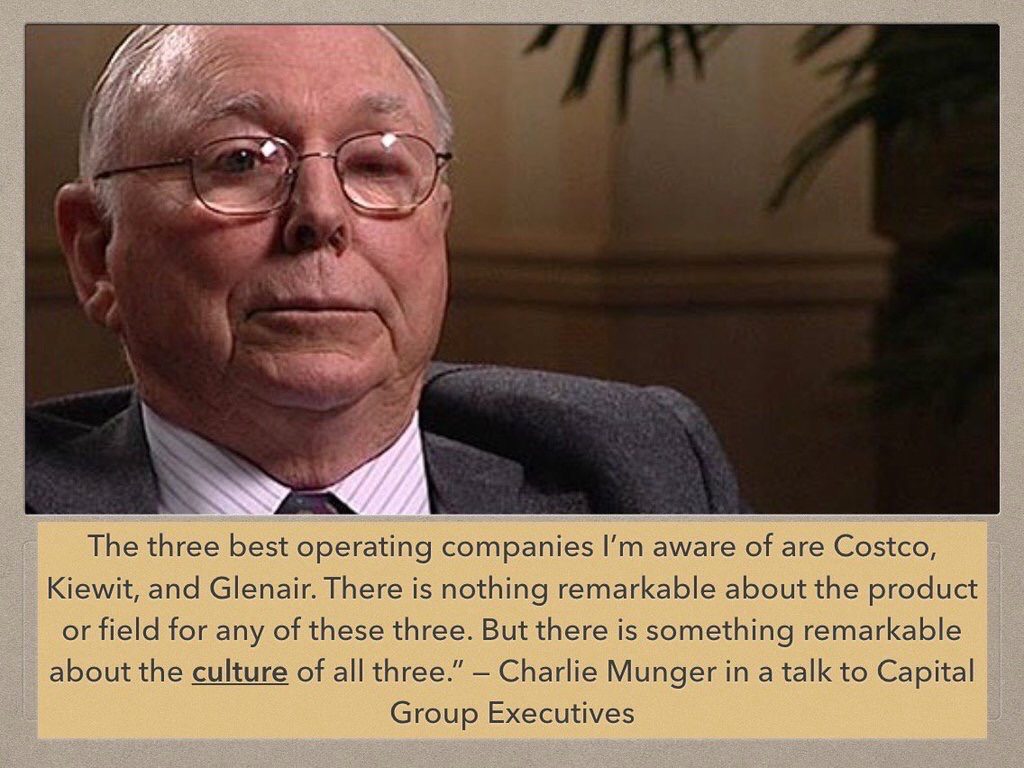 H/T to Sanjay Bakshi for this quote

All great companies started as small companies. Look for microcap companies that dominate a small market that is expanding because these are normally the niches where intelligent fanatics are born. When you find a company like this, ask them what they are doing that their competitors aren’t doing yet? What is their competitive advantage and how sustainable is it? If a competitor had unlimited resources, how quickly could they duplicate the company’s competitive advantage?  How could you hurt this business? If the company is trading at a fair valuation and you objectively conclude that it would be tremendously difficult to hurt the business, then you likely found a winner.

*Since this is our last post of 2016, I want to thank all of you that find value from our educational articles. Our mission is to preach the investing merits of the microcap space so that we can continue to attract quality investors and participants into our beloved investment class.

If you enjoyed this article, you may enjoy:

Don’t Be A Chicken

MicroCapClub is an exclusive forum for experienced microcap investors focused on microcap companies (sub $300m market cap) trading on United States, Canadian, and UK markets. MicroCapClub was created to be a platform for experienced microcap investors to share and discuss stock ideas. Investors can join our community by applying to become a member or subscribing to gain instant view only access. MicroCapClub’s mission is to foster the highest quality microcap investor Community, produce Educational content for investors, and promote better Leadership in the microcap arena. If you enjoy the search for the next great company, Join Us.