The majority of microcap success stories were first able to dominate a small niche market that was expanding. Once they dominated one small market, they used what they learned to enter additional or complimentary markets. Often times these companies didn’t push into new markets, their happy customers pulled them into new geographies, products, or services. The best companies don’t expand too quickly in the beginning. They first learn how to service and please the customer in a small market before expanding. The problem with most microcap companies is they don’t have the discipline to focus on a small market. Peter Thiel talks about this in one of my favorite books, Zero to One. We have a thread devoted to talking about Peter Thiel type microcaps on MicroCapClub.

The perfect target market for a startup is a small group of particular people concentrated together and served by few or no competitors. Any big market is a bad choice, and a big market already served by competing companies is even worse. This is why it’s always a red flag when entrepreneurs talk about getting 1% of a $100 billion market. In practice, a large market will either lack a good starting point or it will be open to competition, so it’s hard to every reach that 1%. And even if you do succeed in gaining a small foothold, you’ll have to be satisfied with keeping the lights on: cutthroat competition means you profits will be zero.Peter Thiel

Microcap companies are somewhat similar to startups in that microcap companies are generally small, young, emerging companies with short operating histories. Many of these company’s founders are new entrepreneurs, so you don’t have much history on which to judge. The smaller the company the more influence founders and management have over the direction of the company. When you invest in microcap companies that dominate (market leaders) a small niche market, at the very least it proves management is competent. The management either created the market or they took share away from competitors. Often times these owner-operators are Intelligent Fanatics that were able to create economic moats in these small markets.


We investors tend to have cognitive or behavioral biases that can impact our returns if not properly addressed. The best investors set up rules and checklists to guard against and countermeasure such biases. I’ve found many investors have a Large Market Bias. If the total available market isn’t more than $1 billion (pick a number) an investor thinks the market opportunity isn’t attractive because it isn’t big enough. Most investor’s bias against investing in small niche markets means the companies that dominate them fall under the radar. In reality small(er) niche markets can be very attractive.


Many species of animals and plants live in niches and not only survive but thrive; so too niche companies.Charlie Munger

Markets aren’t static. They are constantly in a state of flux, which makes them hard to measure. I’d like to drill down further into the concept of niche markets and measuring the market. The illustration below is a good educational reference point on how to think about a company’s market: 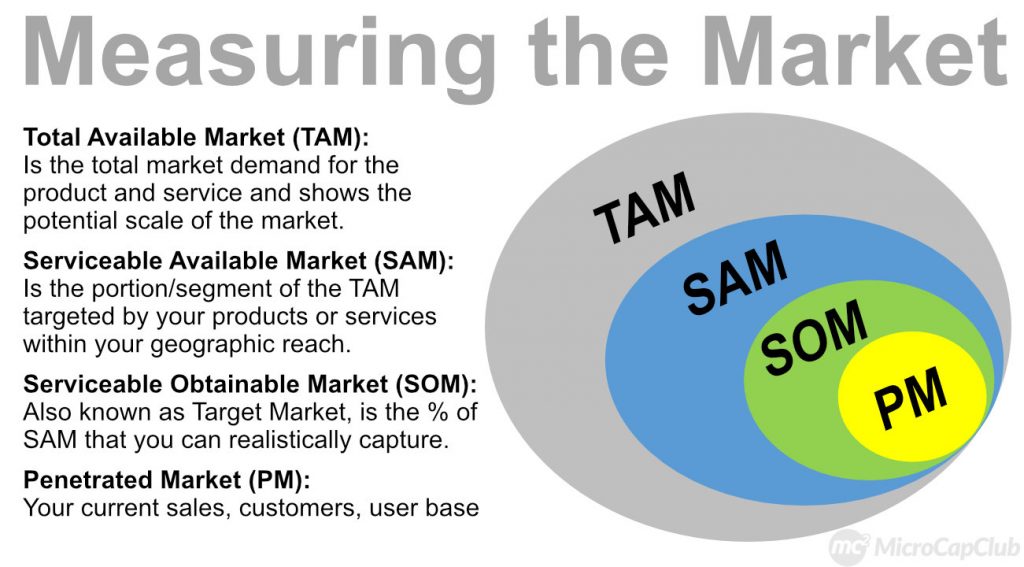 I’m not interested in investing in market leaders in a dying market that might offer a few more puffs on the cigar butt. My mission is to find great companies early, so I want to find great businesses operating in markets that are growing. Many investors put too much emphasis on the size of the TAM, when the focus should be the growth of the TAM. A growing TAM provides a tailwind to the company.

This isn’t to say that large TAM’s are bad. Wal-Mart had a huge TAM when Sam Walton founded the company. Intelligent fanatics like Sol Price of Fed Mart paved the way for the “discounting model”. Sam Walton was successful because of his patience, discipline, focus, and intelligence. Sam Walton also had years of experience operating independent stores before he started Wal-Mart. He than proved out the Wal-Mart model by attacking the small town merchant in a few towns. As he beat up small local merchants he gained scale and leverage to take on larger markets.


Niche businesses find an area of the market that is not being serviced and in a short time dominates that area. Examples of companies that have exploited this type of opportunity can be found in almost every industry. Sam Walton founded Wal-Mart because he saw that the big chains, such as Sears, Kmart, and Montgomery Ward, were not servicing the small towns in the South. He created a much more efficient system of servicing small towns that caught them sleeping at the switch and built one of the largest companies in the world.Charlie Munger

Sam Walton was successful because he focused on his target market (SOM) and at the same time expanded his SAM (no pun intended) through innovation (new products/relationships) and geographical expansion. Many early stage companies fail due to a lack of focus. Just think of how many microcaps immediately hire a “national sales force”. How many times has that worked out? Microcaps are mostly undercapitalized companies that need to take calculated risks and learn through small failures. When a company is unfocused with a shotgun approach to their market, they risk failing big. Aim small. Miss small.

As a microcap investor I love to invest in companies that are leaders, or better yet dominate, their target market (SOM). These market leader attributes tend to flow down the financials. As long as the TAM is growing I’m not concerned with its size. Measuring a market is difficult and abstract because we don’t have perfect information, but you can certainly get a sense if a market is growing. For example, I’m currently invested in a company that dominates its SOM and operates in a small but growing TAM. The TAM is only ~$100 million USD, SAM is ~$25 million, SOM is ~$18 million, and their actual market share of the SOM is 60%. They really dominate their niche in their geographical footprint. Over the next five years, given consumer trends and tailwinds I expect the TAM to increase to $500 million (5x). Due to expanding product lines and geographical expansion I estimate their SAM to increase to $200 million (8x), and due to their moat I believe they can realistically capture 50%. As long as the TAM is growing, don’t discredit a small TAM.

When you are analyzing a company and talking to management it’s important to get a feel for how the company will expand into the future. Look for companies that have adjacent markets, which I call multipliers. When a company dominates one small market they are naturally pulled into complimentary markets they can address/attack quite easily given their dominant brand, reputation, product, and/or service.

Often times, companies that dominate their SOM in a small TAM that is growing fall under the radars of larger potential entrants or competitors. These markets can be too small or will remain too small for larger companies to bother. Depending on the industry, product, or service, these small markets can also be very resilient.

In conclusion, successful investing is counter to our human nature. If you want above average returns you can’t think like everyone else. Eliminate your large market bias and start looking for companies that dominate small niche markets that are growing.